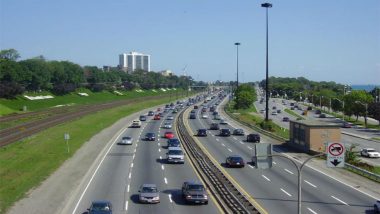 New Delhi, February 3: Union Minister of Road Transport and Highway, Nitin Gadkari on Tuesday announced that the National Highway Authority of India (NHAI) has set a world record in fastest construction of an expressway with highest number of concrete while building the Delhi-Vadodara-Mumbai Expressway. Gadkari took to Twitter and wrote, "In our efforts to build infrastructure for the nation faster than ever, we are not only setting new standards but also breaking world records." Mumbai-Delhi Will be Just a 12-Hour Road Drive With the New Super Expressway Plan.

Both the Indian Book of Records and the Golden Book of World Records have acknowledged Patel Infrastructure Limited, the contractor this achievement. As per the Ministry's official press release,  the construction began at 8 am on Monday and by corresponding time on Tuesday morning  laying down of Pavement Quality Concrete for a  four-lane highway of approximately 10.32 lane kilometres was completed. NHAI to Raise Rs 1 Lakh Cr Through Asset Monetisation on TOT Model in 5 Years: Gadkari.

In our efforts to build infrastructure for the nation faster than ever, we are not only setting new standards but also breaking world records. #Infra4NewIndia#PragatiKaHighway pic.twitter.com/LfpB0Dty1y

Another record was also achieved. The highest quantity of concrete, 14,613 cubic metre was laid in 24 hours.  As per the official release, a total of 8,169 Kilometres of National Highway has been constructed from April 2020 till January 15 this year with a speed of 28.16 Kilometre per day.

(The above story first appeared on LatestLY on Feb 03, 2021 07:44 PM IST. For more news and updates on politics, world, sports, entertainment and lifestyle, log on to our website latestly.com).