Haryana Home Minister Anil Vij on Monday informed the state assembly that no proposal is under the consideration to give martyr status to the farmers who died in the ongoing agitation against three Central farm laws. 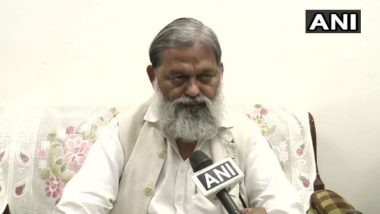 Chandigarh, March 8: Haryana Home Minister Anil Vij on Monday informed the state legislative assembly that no proposal is under the consideration to give martyr status to the farmers who died in the ongoing agitation against three Central farm laws.

Clarifying further, Vij said that there is no proposal to provide either government jobs or financial assistance to the next of kin of the deceased farmers belonging to the state.

Earlier, the opposition Congress had sought martyr status for the deceased farmers and financial assistance for their families on the pattern of Punjab.

Vij said that 68 farmers had died till February 18, of which 21 belonged to Haryana while 47 were from Punjab.

Accusing the Congress members for misleading the House, Education Minister Pal said the state also sympathised with the death of the agitating farmers.

"The death of anyone is painful, but the Congress and its leaders who directly encouraged the elderly farmers to sit on the agitation site are solely responsible for their deaths," he informed said.

The minister said the people of the country would not forgive the leaders who have instigated the innocent farmers.

"The leaders who encouraged the farmers should have thought about the health of the elderly farmers rather than inciting them to sit on the agitation," he said.

While directing questions at a Congress MLA, he asked him to share what is wrong with the farm laws, saying the MLA should not try to mislead the House.

"They should talk on facts as the state government is ready to share each and every fact in the House and is even ready to share information about the crops which were purchased and how much payment was made during the 10-year tenure of the Congress," Pal added.

On sanitation facilities provided to the protesting farmers, the Home Minister said the government has engaged 118 workers and there is a provision of 750 toilet seats.

"Drinking water is being supplied through water tankers at the agitation sites," he said.

Also, 10 ambulances and 10 bike ambulances have been stationed on National Highway 44 and four ambulances at the Tikri border.

(The above story first appeared on LatestLY on Mar 08, 2021 08:32 PM IST. For more news and updates on politics, world, sports, entertainment and lifestyle, log on to our website latestly.com).