Security forces have destroyed opium crops in 620 acres of land in three districts of Bihar in the past one year, an official of state police said on Tuesday. 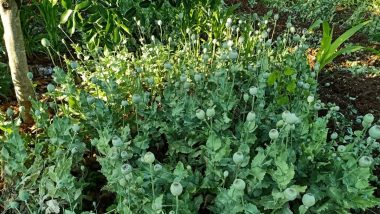 Patna, May 31: Security forces have destroyed opium crops in 620 acres of land in three districts of Bihar in the past one year, an official of state police said on Tuesday.

Farming of opium in Naxal-affected districts of Jamui, Aurangabad and Gaya is turning out to be a major source of revenue generation for the Naxal groups, the official said.

The preparation of opium farming starts after the monsoon session, while the ideal farming time is between January and March.

The people involved in illegal farming of opium generally live in the deep forest areas of Jamui, Auragabad and Gaya Ji. The deep forest of Sikandra in Jamui district and Dhangai and Barachatti in Gaya districts are infamous for opium cultivation in the region. Bihar: In Extortion Bid, 4 Goons Set Petrol Pump Afire in Gaya District.

"Farming of opium is being done generally by the poor of these regions who are protected by Naxal groups. As the majority of lands are state government properties that come under forest areas, it is extremely difficult to hold any person responsible for it. Hence, we initiate force mobilisation in the regions during farming sessions to destroy crops at maximum level. It is a major source of running the Naxal economy," the official said.

"The revenue generated through opium farming is used for purchasing arms and ammunition," he said.

(The above story first appeared on LatestLY on May 31, 2022 02:22 PM IST. For more news and updates on politics, world, sports, entertainment and lifestyle, log on to our website latestly.com).