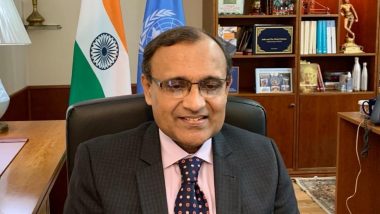 New Delhi, August 4: Pakistan is a nerve centre of terrorism and providing shelters to the largest number of listed terrorists, said TS Tirumurti, India's Permanent Representative at the United Nations on Tuesday. Citing UN reports, TS Tirumurti hit out at Pakistan, saying terror outfits get funding and support from there. He also said that Pakistan Prime Minister Imran Khan has also acknowledged the presence of 40,000 terrorists in his country. India Lodges Strong Protest With Pakistan Over Vandalism of Buddhist Carvings in PoK's Gilgit-Baltistan.

"In recent report of Analytical Support and Sanctions Monitoring Team, which submits its report periodically on terrorist activities of ISIL, Al-Qaeda, there're direct references to Pakistan's involvement. This report, clearly mentions that Pakistanis are in leadership positions of terrorist groups. The report mentions by name the leader of Al-Qaeda who is a Pakistani national. There is a clear acknowledgement that leadership and funding for these entities emanate from Pakistan," Tirumurti said.

The Indian envoy to the UN also said that Pakistan has been making attempts to internationalise the Kashmir issue, which is a bilateral issue between India and Pakistan. "Pakistan's efforts haven't met any traction in UNSC. Even if Pakistan persists, there are no takers here in the United Nations," he said, referring to Islamabad's attempts to raise the issue of abrogation of Article 370 from Jammu and Kashmir.

"I want to reassure you that the attempt by Pakistan to involve the United Nations in the context of Jammu and Kashmir, has not borne fruit and has been strongly refuted by India at every turn," Tirumurti added.

(The above story first appeared on LatestLY on Aug 04, 2020 09:08 AM IST. For more news and updates on politics, world, sports, entertainment and lifestyle, log on to our website latestly.com).