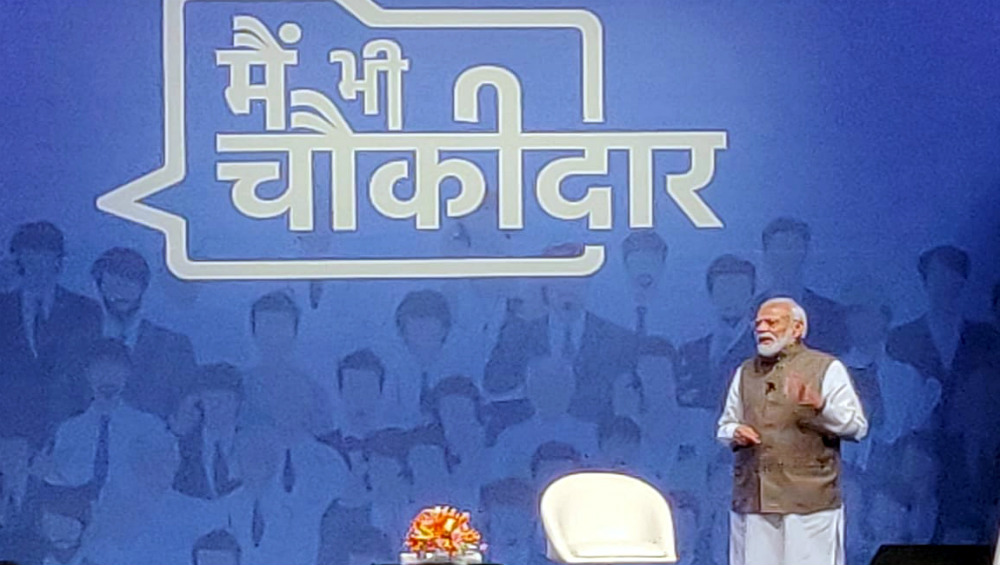 New Delhi, January 29: Prime Minister Narendra Modi's 'Main Bhi Chowkidar' campaign, which was the talk of the nation in the elections last year, has won the silver award at the recent EFFIE Awards India 2020 in Mumbai.

This campaign was created by a filmmaker, Manish Bardia, from Ahmedabad and not from the 'biggies' of ad world. This is a fine example of how Modi utilizes and nurtures the astonishing talents less known to the nation.

For EFFIE Silver, Manish Bardia said, "This was not just a campaign; it was a mass movement that was ignited in the mind of PM himself. I just extended his vision. It is good that advertising fraternity identified the campaign that touched, moved and changed millions of lives."

In March 2019, PM Modi changed the name of his Twitter handle to 'Chowkidar Narendra Modi'. His idea was simple, but he used it very powerfully to inspire people.

Immediately after this, a series of films, song and outdoors were released in 9 Indian languages. A political message was conveyed in a non-political manner, whoever is doing well for society and country is a 'Chowkidar', just like Prime Minister Mr. Modi.

#MainBhiChowkidar had over 9 lakh tweets globally in just 24 hours. Millions of people changed their DPs (display pictures) and profiles to show their solidarity. A series of ads targeting masses were released, showing people from all walks of life identifying themselves as 'chowkidars'.

This campaign turned into a mass movement. It ran in an auto mode. People started organizing 'I am also a custodian' events, not just in India but also in the US, Australia, Africa and many other places.

The result was tremendous. Narendra Modi became the Prime Minister of India once again with a historic win. Next morning, nearly all major national and regional newspapers were flooded with one word in their headlines 'Chowkidar'.