Ram Mandir Bhumi Pujan: MEA Asks Pakistan Not to Interfere in India's Internal Matters And to Refrain From 'Communal Incitement' 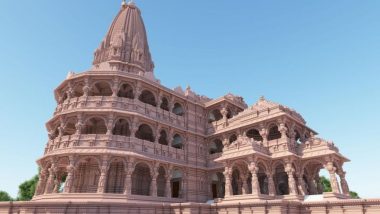 New Delhi, August 6: India on Thursday lashed out at Pakistan for criticising the foundation laying of the Ram temple in Ayodhya on the site of the Babri Masjid. The Ministry of External Affairs (MEA) in a statement warned Pakistan not to interfere in internal matter of India. It also asked the neighbouring country to refrain from communal incitement. Ram Mandir Bhumi Pujan: PM Narendra Modi Lays Foundation Stone at Ram Janmabhoomi For Construction of Ram Temple in Ayodhya.

The MEA stated, "We have seen the press statement by the Islamic Republic of Pakistan on a matter internal to India. It should desist from interfering in India's affairs and refrain from communal incitement." Slamming Pakistan, the MEA said that it was not a surprising stand from a country that practices cross border terrorism and deny its own minorities their religious rights. The ministry added, "such comments are nevertheless deeply regrettable."

While this is not a surprising stance from a nation that practices cross border terrorism and denies its own minorities their religious rights, such comments are nevertheless deeply regrettable: Ministry of External Affairs (MEA) https://t.co/kGQezrT0xE

Pakistan on Wednesday criticised the foundation laying of the Ram temple in Ayodhya on the site of the Babri Masjid. The groundbreaking ceremony for the construction of the temple took place on Wednesday in Ayodhya with Prime Minister Narendra Modi performing the "bhumi pujan" of the temple. LK Advani on Ram Mandir Bhumi Pujan: 'Historical, Emotional Day...Dream Getting Fulfilled'.

The Indian Supreme Court in a unanimous verdict last year cleared the way for the construction of a Ram Temple at the disputed site at Ayodhya, and directed the Centre to allot a 5-acre plot to the Sunni Waqf Board for building a mosque.

(The above story first appeared on LatestLY on Aug 06, 2020 04:01 PM IST. For more news and updates on politics, world, sports, entertainment and lifestyle, log on to our website latestly.com).