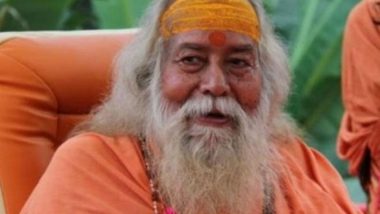 Ayodhya, July 23: As preparations are underway for the construction of Ram temple in Ayodhya, revered seer Shankracharya Swaroopanand Saraswati on Thursday said that the time fixed for the 'Bhumi Pujan' ceremony is an 'inauspicious moment'.

"We are Ram devotees, we will be happy if anyone builds the temple of Ram, but for that- appropriate date and auspicious time should be chosen. There should not be politics in this. Due to politics, the issues of Hindus get knocked down. The temple was being built with the public's money, their opinion should be sought as well," he said while speaking to ANI. PM Narendra Modi to Lay Foundation Stone of Ram Temple on August 5, All Chief Ministers To be Invited to the Event.

The height of Ayodhya's grand Ram temple would be 161-feet, an increase by 20-feet from the previous design which was prepared in 1988, according to Nikhil Sompura, architect and the son of C Sompura, chief architect of the temple.

The Trust had invited Prime Minister Modi to lay the foundation stone of the temple either on August 3 or 5. A five-judge Supreme Court bench led by then CJI Ranjan Gogoi ruled in favour of Ram Lalla and said the entire disputed land spread over 2.7 acres will be handed over to a trust formed by the government, which will monitor the construction of a Ram temple at the site.