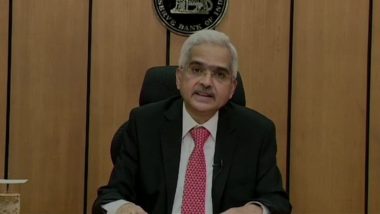 New Delhi, May 22:The Reserve Bank of India Governor Shaktikanta Das addressed the media at 10 am today. One of the major announcements of today's press conference was that the repo rate has been slashed by 40 basis point. The repo rate has been reduced from 4.4 percent to 4 percent. The Reverse repo rate stands reduced to 3.35 percent. This means that loans will also turn cheaper.

Das further said that the need of the hour is to have faith in India's resilience as coronavirus has crippled the world economy.  There was buzz that the central bank may extend a moratorium on payment of all term loans. This is the third presser of the governor in the context of COVID-19 related measures in the last two months. The first one was on March 27 and the second on April 17. India Records Biggest Single-Day Spike of 6,088 Cases in Past 24 Hours, COVID-19 Tally Rises to 1,18,447, Death Toll Mounts to 3,583.

Last month, the RBI cut its reverse repo rate by 25 basis points (bps) to 3.75 percent. The rate had already been cut by 90 bps on March 27. In March, RBI had allowed a three-month moratorium on payment of all term loans due between March 1, 2020, and May 31, 2020. In the last two press conferences, RBI governor had announced a series of measures to ease the liquidity pressure in the banking system and cushion the economy from the COVID-19 shock.

The government recently announced a Rs 20 lakh crore economic stimulus package to deal with the blow caused by the COVID-19 crisis. The package also included Rs 8 lakh crore of liquidity measures announced by the Reserve Bank since March.

(The above story first appeared on LatestLY on May 22, 2020 10:12 AM IST. For more news and updates on politics, world, sports, entertainment and lifestyle, log on to our website latestly.com).