The Securities and Exchange Board of India (SEBI) has directed PNB Housing Finance to stall the proposed preferential issue of shares worth up to Rs 4,000 crore to entities led by the The Carlyle Group Inc. 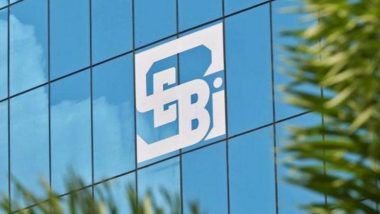 Mumbai, June 20: The Securities and Exchange Board of India (SEBI) has directed PNB Housing Finance to stall the proposed preferential issue of shares worth up to Rs 4,000 crore to entities led by the The Carlyle Group Inc.

The company received a letter from the capital market regulator on June 18 calling it to comply with the legal provisions in the matter.

"The current resolution bearing item no. 1 (Issue of Securities of the company and matters related therewith) of EGM notice dated May, 31, 2021 is ultra-vires of AOA (articles of association) and shall not be acted upon until the company undertakes the valuation of shares as prescribed under 19(2) of AOA, for purpose of preferential allotment, from an independent registered valuer as per the provisions of applicable laws," a regulatory filing by PNB Housing Finance quoted the letter as saying. India’s GDP Likely to Grow at 8.7% in FY22: Motilal Oswal Financial Services.

SEBI further said that the report shall be considered by the company's board while deciding on the preferential issue of shares and warrants.

In the exchange filing, PNB Housing Finance also said that the company and its Board of Directors have considered the SEBI Letter, and "continue to believe that the company has acted in compliance with all relevant applicable laws, including the applicable pricing regulations prescribed by SEBI, and the Articles of Association of the Company, and that such Preferential Allotment is in the best interests of the Company, its shareholders and all relevant stakeholders".

The company is evaluating further steps in this regard, it added.

On May 31, the housing finance company announced that its board has approved a capital raise of up to Rs 4,000 crore, led by entities affiliated to The Carlyle Group Inc.

Pluto Investments S.a.r.l., an affiliated entity of Carlyle Asia Partners IV, L.P. and Carlyle Asia Partners V, L.P., agreed to invest up to Rs 3,185 crore through a preferential allotment of equity shares and warrants, at a price of Rs 390 per share, the bank had said in a regulatory filing.

Existing shareholders of the company, funds managed by Ares SSG and General Atlantic, were also likely to participate in the capital raise.

Post the proposed preferential issue, PNB would have continued to be the promoter and a key stakeholder in the company.

The company had then said that pursuant to the SEBI's 'Takeover Regulations', the proposed transaction will trigger a mandatory open offer by Pluto Investments S.a.r.l. for the purchase of up to 26 per cent equity shares of PNB Housing Finance from public shareholders.

As part of this transaction, Salisbury Investments Pvt. Ltd., the family investment vehicle of Aditya Puri, Senior Advisor for Carlyle in Asia and the former CEO & Managing Director of HDFC Bank, would also invest in the capital raise.

Post the transaction, Puri was expected to be nominated to the PNB Housing Finance Board as a Carlyle nominee Director in due course.

(The above story first appeared on LatestLY on Jun 20, 2021 02:34 PM IST. For more news and updates on politics, world, sports, entertainment and lifestyle, log on to our website latestly.com).