SIT To Probe Death of Jharkhand Judge in Hit and Run Incident in Dhanbad; 2 Arrested After Driver Admits Crime

A Special Investigating Team (SIT) has been set up under Additional Director General of Police (ADG) to probe the death of a Judge who was hit by an auto-rickshaw while he was on his morning walk, in Dhanbad. 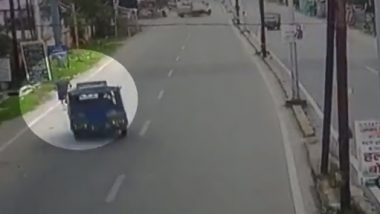 Ranchi, July 29: A Special Investigating Team (SIT) has been set up under Additional Director General of Police (ADG) to probe the death of a Judge who was hit by an auto-rickshaw while he was on his morning walk, in Dhanbad. The hit-and-run incident took place on Wednesday morning. ADG operation, Sanjay Ananad Latkar will lead the SIT, while the other members are Deputy Inspector General of Police (DIG), Bokaro and Dhanbad Senior Superintendents of Police (SSP).

Additional District Judge (ADJ) of Dhanabad district, Anand Uttam died after he was hit by a vehicle on Wednesday when was on his morning walk near Magistrate colony of coal city Dhanabd. He was admitted to a hospital where he died during treatment. Jharkhand Judge Killed After Being Hit by Autorickshaw During Morning Walk in Dhanbad, Murder Suspected After CCTV Footage Surfaces (Watch Video).

Later CCTV footage showed that an auto-rickshaw deliberately hit the Judge. Two people including driver of the auto-rickshaw, Lakhan Verma and his associate Rahul Verma have been arrested. The driver has reportedly admitted that he hit the judge with the vehicle.

The Jharkhand High Court, after knowing about the death of the judge, on Thursday summoned the DGP and Dhanbad SSP. While hearing the case, the court said, "If at any stage it is found that any slackness has been maintained in the probe, it will be handed over to the CBI".

The auto was recovered from Giridih district on Wednesday night itself. During investigation it was found that the auto was stolen on Tuesday and the judge was hit by it on Wednesday morning at 5.08 a.m. He died in the hospital at 9.30 a.m. The judge was hearing matters of more than 15 criminal cases including high profile murder cases in his court. The Supreme Court has also taken note of the judge's death.

(The above story first appeared on LatestLY on Jul 30, 2021 01:21 PM IST. For more news and updates on politics, world, sports, entertainment and lifestyle, log on to our website latestly.com).