Locals alerted the fire brigade immediately after the boy fall, which sent two of its personnel into the manhole along with oxygen cylinders. 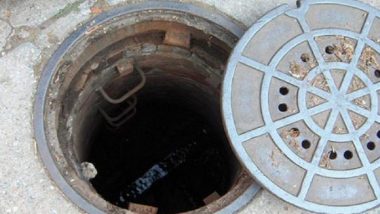 Surat, July 15: A 7-year-old boy in Surat died on Sunday after being washed into an open manhole. The incident was reported from Nana Varachha, where the boy identified as Rohan R Bhil, resident of Girnar Society, was playing along with his friends.

As rainfall turned incessant in the afternoon, water began flowing with intensity into the open manhole located close to the Nana Varachha police chowki, falling under the Kapodra police station area. Eyewitnesses claim the boy slipped with the gush of water and fall into the manhole.

Locals alerted the fire brigade immediately, which sent two of its personnel into the manhole along with oxygen cylinders.

The fire department and civic body personnel also searched for the boy at the outlet of the nullah which flows into the Tapi river, located nearly 1km from the site of the manhole.

After five hours of search, the body of the 7-year-old was found. He was rushed to the SMIMER hospital, where the doctors declared him dead on arrival.

#WATCH A boy in Surat's Varachha area falls into an open manhole while playing on the road in rain. The boy has not been found yet. Fire brigade officials are currently engaged in search and rescue operation. #Gujarat pic.twitter.com/5nBHvpbcHX

Chief Fire Officer Vasant Parikh expressed sorrow over the child's demise, adding that his team left no stone unturned to find him as early as possible and save his life.

(The above story first appeared on LatestLY on Jul 15, 2018 08:57 PM IST. For more news and updates on politics, world, sports, entertainment and lifestyle, log on to our website latestly.com).