UP Shocker: School Dropout Performs C-Section With Razor Blade in Sultanpur, Both Woman and Her Newborn Die

A woman bled to death and her newborn died after a 30-year-old school dropout performed a "caesarean section" on her with a shaving razor blade. 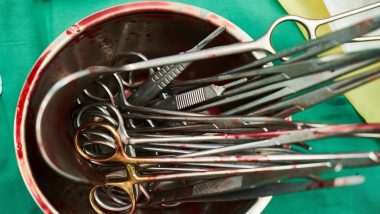 Sultanpur, March 20: A woman bled to death and her newborn died after a 30-year-old school dropout performed a "caesarean section" on her with a shaving razor blade. The heart-wrenching incident took place at a private hospotal in Saini village in Sultanpur district of Uttar Pradesh on March 17. After the incident, Rajendra Shukla, who performed C-section 30-year-old Poonam, and Rajesh Sahni, owner of Maa Sharda Hospital were booked. UP Shocker: 17-Year-Old Girl Dies in Hamirpur, Father Alleges Rape.

After Poonam went into labour, a midwife told her husband Rajaram to take her to Maa Sharda Hospital because her condition was critical. At the hospital, Shukla performed C-section on Poonam with a razor blade on a makeshift operation table. When Poonam bled profusely, Shukla told Rajaram to take her to the district hospital. According to the police, she was driven 140 km to KGMU Trauma Centre in Lucknow, where she died. Uttar Pradesh: Minor Attempts Suicide After Sexually Assaulted By Brother-in-Law.

The baby had also died minutes after birth. The next day, Rajaram lodged a complaint alleging that his wife and their newborn had died due medical negligence at Maa Sharda Hospital. "We found that it was an unregistered clinic with no infrastructure to perform surgeries. Quacks used razor blades to conduct operations," Sultanpur SP Arvind Chaturvedi told TOI.

It was also learned that Sahni brought Shukla, who studied till class 8, at his ill-equipped and unregistered hospital a year ago to perform surgeries. Both of them were charged for culpable homicide not amounting to murder. Meanwhile, police have written to the chief medical officer to launch a crackdown against illegal clinics.

(The above story first appeared on LatestLY on Mar 20, 2021 11:31 AM IST. For more news and updates on politics, world, sports, entertainment and lifestyle, log on to our website latestly.com).