A 50-year-old woman fell into a nullah here and kept herself afloat for 16 hours before she was finally rescued. 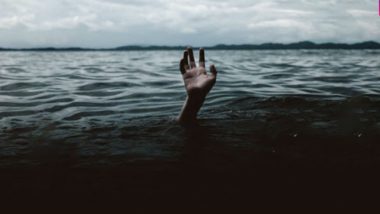 Jalaun, Aug 1: A 50-year-old woman fell into a nullah here and kept herself afloat for 16 hours before she was finally rescued.

The woman, identified as Jai Devi, clung on to a piece of wooden log that came her way in the strong currents even as she was swept away into the flooded Yamuna on Friday.

She was rescued about 25 kilometres away in Hamirpur by some boatmen, who heard her cries for help and pulled her out of the river. She was later reunited with her family by the police. Haryana Shocker: 2 Minor Boys Drown in Water-Filled Pit in Karnal's Uchani Village.

According to reports, Jai Devi had gone to her fields when she accidentally fell into the swollen Kilandar nullah in Jalaun that empties into the river Yamuna.

After falling into the stream on Friday evening, she was swept away following a strong current that took her to the Yamuna River.

She caught on to a wooden log and remained afloat for more than 16 hours.

When the boatmen in the Manki village in Hamirpur district saw her drifting in the river, they alerted the police and brought her out.

She was admitted to a hospital and her son Rahul and daughter Vinita were informed and they rushed to her side.

The police later handed the woman to her family members. Haraulipur police outpost in-charge Bharat Yadav said, "It was nothing but God's miracle."

(The above story first appeared on LatestLY on Aug 01, 2021 11:33 AM IST. For more news and updates on politics, world, sports, entertainment and lifestyle, log on to our website latestly.com).