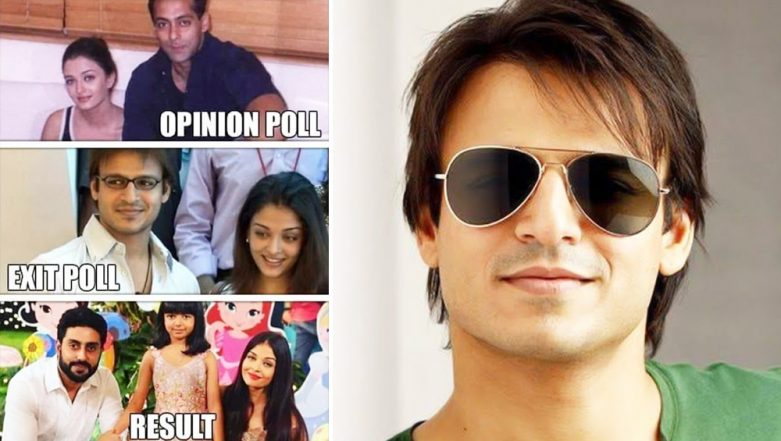 Mumbai, May 21: Days after Bollywood actor Vivek Oberoi shared a distasteful meme on exit polls 2019, Mumbai Mahila Congress wrote to Police seeking to lodge an FIR under Section 509 of the IPC Act on Tuesday. The women's cell of the Congress party stated that the action is taken against the actor for insulting the modesty of women.

Soon after the tweet, Oberoi faced the wrath of netizens on Twitter, with social media users lambasting him for his approach towards women, he was also served with a legal notice by National Commission For Women (NCW). Torn apart on Twitter for unnecessarily degrading a woman, Oberoi later deleted the tweet. Vivek Oberoi Shares Distasteful Exit Poll Meme Including Aishwarya Rai, Abhishek Bachchan, Aaradhya, Salman Khan And It's Wrong At All Levels!

Apologising for fo the tweet, he tweeted on Tuesday, "Even if one woman is offended by my reply to the meme, it calls for remedial action. Apologies🙏🏻 tweet deleted."

Even if one woman is offended by my reply to the meme, it calls for remedial action. Apologies🙏🏻 tweet deleted.

Along with this, he also mentioned that he, through his tweet, had no intentions to disrespect woman. He wrote, "Sometimes what appears to be funny and harmless at first glance to one, may not be so to others. I have spent the last 10 years empowering more than 2000 underprivileged girls, I cant even think of being disrespectful to any woman ever."

Earlier, the 'PM Narendra Modi' biopic actor while commenting on the exit poll surveys had tweeted, "Haha! creative! No politics here....just life". In that tweet, he had brought up the fact that Aishwarya had once dated Salman Khan (calling it opinion poll), but later moved onto him (exit poll) and finally settled down with Abhishek Bachchan (the end result).

Mumbai Mahila Congress writes to Police seeking to lodge an FIR under Section 509 of the IPC Act against actor Vivek Oberoi for his 'obnoxious statement on women in a meme which has insulted the modesty of women.'