Attack on YSR Telangana Party (YSRTP) leader Y. S. Sharmila's convoy allegedly by the supporters of ruling Telangana Rashtra Samithi (TRS) and her subsequent arrest by the police triggered tension during her padyatra in Warangal district on Monday. 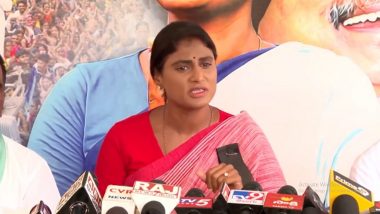 Hyderabad, November 28: Attack on YSR Telangana Party (YSRTP) leader Y. S. Sharmila's convoy allegedly by the supporters of ruling Telangana Rashtra Samithi (TRS) and her subsequent arrest by the police triggered tension during her padyatra in Warangal district on Monday.

Police stopped Sharmila's padyatra and arrested her and YSRTP leaders and workers accompanying her in Chennaraopeta mandal. YSRTP cadres tried to resist the arrests and raised slogans against the police and the TRS government. The police used mild force to control the situation. YSR Telangana Party Founder YS Sharmila Alleges Conspiracy Behind Her Father YS Rajasekhara Reddy’s Death, Says ‘I Am Also a Target’.

Sharmila wanted to know from police why were they taking her into custody instead of arresting those who attacked her bus. YSRTP alleged that the bus which Sharmila is using to rest during her ongoing Praja Prasthanam padayatra was attacked and burnt down by the members of the ruling TRS party.

The mob also damaged cars belonging to YSR Telangana Party leaders. The incident happened near Lingagiri village, under Chennaraopeta mandal in Warangal district. Sharmila was participating in the padyatra on 223rd day when a group of men chanting pro-TRS slogans and hailing KCR, reached the place where the caravan was halted and torched it.

"For the past 223 days, me and my Party leaders and representatives are holding a peaceful Padayatra to highlight the plight of various sections of people in Telangana. Our rising popularity has jolted Chief Minister KCR and his party men, who want to stop me at any cost," she said.

Daughter of former chief minister Y. S. Rajasekhara Reddy said that it is highly unfortunate that some police officers are siding with the ruling party and disrupting 'our efforts to reach the people and raise their issues.'

The Praja Prasthanam padayatra has so far crossed 3,500 kms mark, covering 75 Assembly segments in the State. She has covered 1863 villages under 208 mandals and 61 Municipalities along with 4 Municipal Corporations, so far.

(The above story first appeared on LatestLY on Nov 28, 2022 05:45 PM IST. For more news and updates on politics, world, sports, entertainment and lifestyle, log on to our website latestly.com).