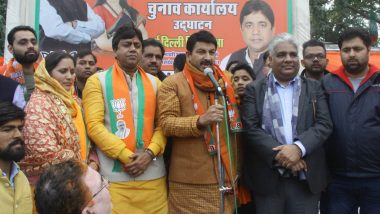 New Delhi, February 19: The Bharatiya Janata Party (BJP) used face/voice-swapping technology and deepfakes in the recently concluded assembly elections in Delhi, according to US-based digital publication Vice. The report cited videos of Delhi BJP leader Manoj Tiwari that surfaced on February 7, a day before polling in the national capital. While in the original video, Manoj Tiwari was seen talking about the Citizenship Amendment Act, the BJP used deepfake technology to make two more videos using the same visual but with the different utterance, Vice reported. What is ‘Deepfake Video?’ Know Everything About the Face Swap AI Technology, Will Fake News be Uncontrollable?.

In one of the two videos, Tiwari spoke in English to slam the Arvind Kejriwal government. The other video was of him speaking in the Hindi dialect of Haryanvi. "[Kejriwal] cheated us on the basis of promises. But now Delhi has a chance to change it all. Press the lotus button on February 8 to form the Modi-led government," he said. The two videos that went viral on WhatsApp were made by the BJP IT cell using deepfakes, Vice reported. Deepfake videos are those which use artificial intelligence to make anyone do or say anything. Manoj Tiwari Offers to Resign After BJP Rout in Delhi Assembly Elections 2020, Asked by Party to Continue.

Speaking to Vice, Neelkant Bakshi, co-incharge of social media and IT for BJP Delhi, admitted that the party used deepfake technology during the assembly polls. "Deepfake technology has helped us scale campaign efforts like never before," Bakshi was quoted as saying. "The Haryanvi videos let us convincingly approach the target audience even if the candidate didn't speak the language of the voter," he added.

The report further said that the BJP has partnered with political communications firm The Ideaz Factory to create “positive campaigns” using deepfakes. Shedding light on how Tiwari's videos were made, Sagar Vishnoi, the chief strategist at The Ideaz Factory said: "We used a ‘lip-sync’ deepfake algorithm and trained it with speeches of Manoj Tiwari to translate audio sounds into basic mouth shapes."

The two videos made by deepfake technology across 5,800 WhatsApp groups in Delhi and the NCR region, reaching approximately 15 million people, the report said. In Delhi assembly polls, the Aam Aadmi Party (AAP) returned to power, winning 62 seats, whereas the BJP was restricted to 8.

(The above story first appeared on LatestLY on Feb 19, 2020 11:14 AM IST. For more news and updates on politics, world, sports, entertainment and lifestyle, log on to our website latestly.com).