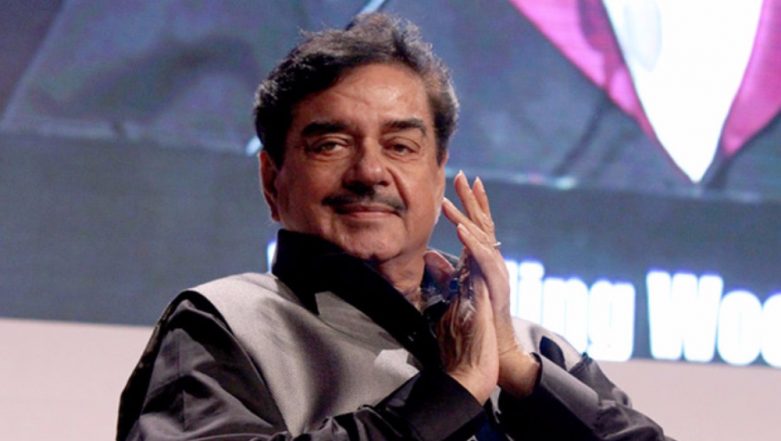 Patna, May 17: Congress leader Shatrughan Sinha on Friday claimed that the Narendra Modi wave (lahar) in the country has now turned into chaos against the Prime Minister. "Modi lahar has turned into Modi qahar (Modi wave has turned into Modi havoc)," he said at a press conference which was attended by several leaders of the grand alliance, adding that the "gali-gali me shor hai, chowkidar chor hai" was being raised frequently.

Launching a scathing attack on BJP chief Amit Shah, Sinha stated that people of Bihar will show him his "aukat" (worth) in the upcoming elections. "Amit Shah said he will show Bihari Babu (Sinha) his worth (aukat). The way Prime Minister Narendra Modi talked of Bihar's DNA, people showed him his worth during the assembly elections. After the roadshow that happened today, they (BJP and its allies) will be aware of their worth. And whatever is left, people of Bihar will let them know of their worth in the upcoming elections," he asserted. Lok Sabha Elections 2019: Congress Fields Shatrughan Sinha From Patna Sahib Constituency in Bihar Against BJP’s Ravi Shankar Prasad.

Sinha claimed that he had to pay a price for standing by LK Advani when he was in the BJP. "As someone elected by people, I raised the voice of the general public although sycophants in the (NDA) government could not do so. I stood with Advaniji in that party when he was sidelined. I said he is a friend, philosopher, guide, it should not be done. Some say I paid a price for it," said the former BJP leader.

He also asserted that he kept speaking against the policies of Modi-led NDA government. "All I want to say is, I have never done anything that you can say is selfish. I never fought any battle for myself. I spoke against demonetisation. I said the party is bigger than the individuals and the country is bigger than the party. I kept speaking for the betterment of the country. I spoke against the complicated GST," he said.

"People said I am rebelling against the party. I respect several members of the party even now. But democracy ended and dictatorship began. Democracy was there during the term of scholar Dr Manmohan Singh, Atal Bihari Vajpayee. Now you see, it has become a one-man show and two-man army," he added. The Congress candidate from Patna Sahib Lok Sabha constituency also lamented that he could not stand against the "propaganda machine."

"I did not speak against him (Modi). I spoke against his policies. They said I am saying it because I was not made a minister. I could not stand before their propaganda machine. I asked if the same yardstick would be applied to Advani ji, Murli Manohar Joshi, Yashwant Sinha and Arun Shourie as well," he said.

"They threatened me. They said I won't be given a ticket. They threatened to expel me from the party. I said do it but remember Newton's third law that there will be a reaction against every action. Now, you are seeing that reaction," he asserted. Sinha also lauded Congress president Rahul Gandhi for his "tried, tested and successful" leadership.

"Under the tried, tested and successful leadership of Rahul Gandhi, Congress won three elections within a year of him becoming party president," he said. Terming Rashtriya Janata Dal (RJD) chief Lalu Yadav as the "victim of revenge politics", Sinha claimed that people of Bihar want to see him free. "Jail ka phatak tootega, Lalu Yadav chhutega- this is what the people of Bihar want," he said. As Sinha's opponent, BJP has fielded Union Minister Ravi Shankar Prasad from Patna Sahib, which will go to polls on May 19. The counting of votes will be done on May 23.