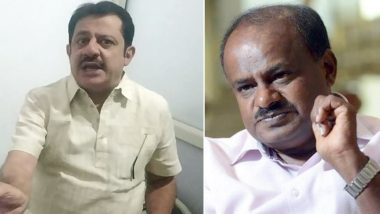 After the workers of Janata Dal (Secular) staged protest outside his house, Khan defended his statement saying person with dark complexion will be called dark. "Yesterday JDS workers protested in front of my house. They filed a complaint also. If Kumaraswamy was fair, and I had called him black/dark then it's my mistake. He's dark. People call me short, God made us like this. God made him dark, so he's dark. Dark will be called dark only," the Chamrajpete legislator was quoted by India Today as saying.

Earlier this week, members of the JD(S) lodged a complaint against Khan and sought appropriate legal action against him. They submitted a CD of Khan's speech in Basavakalyan and alleged that such comments were aimed at disturbing peace in society. JD(S) workers had, last week, protested in front of Khan's house.

Basavakalyan, along with Maski assembly constituency and Belgaum Lok Sabha seat, is going for by-polls on April 17. While the ruling Bharatiya Janata Party fielded youth leader Sharanu Salagar from Basavakalyan, the Congress nominated Mallamma, the widow of legislator B Narayan Rao whose death necessitated the by-elections. JD(S) named Syed Yasrab Ali Quadri as its candidate.

(The above story first appeared on LatestLY on Apr 08, 2021 11:41 AM IST. For more news and updates on politics, world, sports, entertainment and lifestyle, log on to our website latestly.com).