The Congress leader, who is on a three-day tour of poll-bound Tamil Nadu, was seen dancing with students of St. Joseph's Matriculation Hr. Sec. School in Mulagumoodubn during an interaction with them. 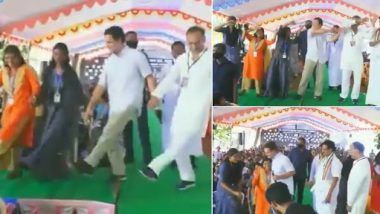 Chennai, March 1: Congress leader Rahul Gandhi was seen dancing with students of a secondary school in Tamil Nadu's Mulagumoodu on Monday. The Congress leader, who is on a three-day tour of poll-bound Tamil Nadu, was seen dancing and taking up a push-up challenge with students of St. Joseph's Matriculation Hr. Sec. School in Mulagumoodubn. The 50-year-old leader was seen holding the hands of the students and trying to match the dance steps done by the students. Gandhi was also seen taking the push-up challenge by Merolin Shenigha, a 10th standard Judo enthusiast. He also interacted with them.

In his address today, Gandhi said Tamil Nadu should show the way to India in keeping away the forces that are inimical to language and culture and those projecting "one culture, one nation and one history" concept. During his visit to the southern state, Gandhi also interacted with several college teachers and also visited the temple in Tirunelveli on Sunday.

Last week, Gandhi was spotted with the local fishermen in Kerala and was seen pulling the net with them in high sea to get a taste of their life and understand the issues facing them. In an emotional talk with thousands of fisherfolk. Earlier, the Wayanad MP ventured into the sea with some fishermen in their boat from Vadi beach and spent nearly an hour with them before reaching the venue of interaction.

(The above story first appeared on LatestLY on Mar 01, 2021 02:31 PM IST. For more news and updates on politics, world, sports, entertainment and lifestyle, log on to our website latestly.com).