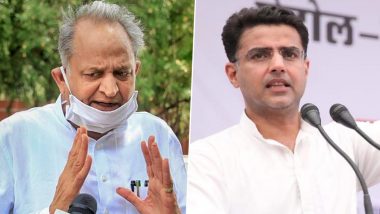 Jaipur, July 27: Upto 15 Congress MLAs, who are currently backing Chief Minister Ashok Gehlot, will switch sides once set free, said a legislator siding with sacked former deputy CM Sachin Pilot. The startling claim comes amid a hectic political crisis in Rajasthan, with Gehlot currently at loggerheads with the Governor over the reconvening of Legislative Assembly.

Hemaram Choudhary, a senior MLA and one of the staunch supporters of Pilot, said 10-15 legislators of the Gehlot camp are in contact with them. Once they are out of the Fairmont Hotel, and are able to move freely, they will jump ship to support Pilot. Rajasthan Political Crisis: '21-Day Notice', 'Social Distancing' Among Points Raised by Governor on Appeal to Convene Assembly.

"10-15 MLAs of Ashok Gehlot camp are in contact with us and are saying they will come to our side as soon as they are set free. If Gehlot removes restrictions, it'll become clear how many MLAs remain on their side," Choudhary said.

A total of 102 MLAs are backing Gehlot, including 88 from the Congress. In case of a trust vote, the government will have to prove the backing of at least 101 out of the 200 members of the Assembly.

The Pilot camp, whose strength is currently stated to be 19 legislators, are hopeful of more defections from the Congress rank in the days leading up to the tabling of no-confidence motion in the Vidhan Sabha.

Gehlot, since the past week, has issued repeated appeals to Governor Kalraj Mishra, asking him to convene the Assembly. The Governor, in his six points of apprehension in response to Gehlot's plea, had asked why there was a need to prove strength when he has the numbers.

After Gehlot submitted a fresh plea citing economic challenges and COVID-19 strategy as the reasons behind convening the Assembly, Mishra asked him to deliberate on three aspects which include a "21-day prior notice to MLAs", "maintenance of social distancing" and adhering to norms in case of a no-confidence motion.

(The above story first appeared on LatestLY on Jul 27, 2020 06:35 PM IST. For more news and updates on politics, world, sports, entertainment and lifestyle, log on to our website latestly.com).