The bullet-ridden body of Aurangzeb was found near Goosu village of Pulwama early on Friday. He was reportedly kidnapped by suspected Hizbul militants a day earlier. 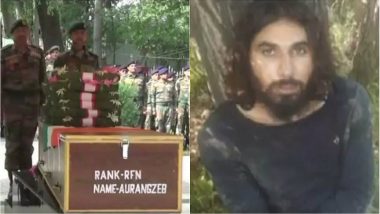 The bullet-ridden body of Aurangzeb was found near Goosu village of Pulwama early on Friday. He was kidnapped by suspected Hizbul terrorists yesterday | (Photo Credits: Left - ANI; Right - CNN-News 18/Screengrab)

Srinagar, June 15: Father of slain Indian Army jawan Aurangzeb has demanded the government to "find and shoot" down the killers of his son "within the next 72 hours". The bereaved father's remarks came while speaking to reporters at Aurangzeb's funeral earlier in the day.

Aurangzeb was laid to rest with full state honours in Poonch's Mendhar after the congregational prayers of Friday. The gathering at the deceased rifleman's burial raised slogans against Pakistan -- which is accused of ideologically and financially abating the militancy in the Valley.

Aurangzeb, 25, was part of the 4th Jammu & Kashmir Light Infantry. He was currently posted at 44 Rashtriya Rifles in Pulwama. The young jawan was abducted by suspected Hizbul Mujahideen militants at around 9:00 am on Thursday.

The kidnapping was reportedly executed in Kalampora, which lies enroute to Poonch from Pulwama. Aurangzeb was returning home for Eid celebrations. The Santro car, in which he had left from Pulwama, was being driven by a State Education Department employee. The latter was left scot-free by the militants while abducting Aurangzeb.

The bullet-ridden body of the deceased was found near Goosu village of Pulwama early on Friday. The militants also released an image of Aurangzeb, captured shortly before his death on social media.

Reports claim the assassination of Aurangzeb could be a "revenge-attack" by militants as the late rifleman was part of the commando unit which killed top Hizbul commander Sameer Ahmed Bhat, alias Sameer Tiger, in Pulwama district's Drabgam area in April this year.

The killing of Aurangzeb is reminiscent to the murder of 22-year-old Lt Ummer Fayaz in Shopian last year. The young lieutenant of Rashtriya Rifles had returned home to attend a wedding when he was kidnapped and murdered by Lashkar-e-Taiba insurgents.

(The above story first appeared on LatestLY on Jun 15, 2018 10:34 PM IST. For more news and updates on politics, world, sports, entertainment and lifestyle, log on to our website latestly.com).