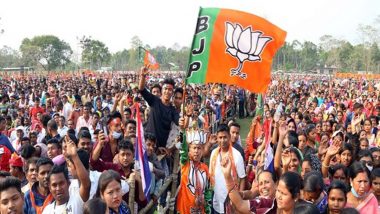 The BJP won both seats in the by-elections.

Rampur and Azamgarh have been considered as SP strongholds and this, being the first by elections after the March assembly elections, is a major blow to the party leadership.

Azamgarh was earlier held by SP president Akhilesh Yadav and he had resigned after winning the assembly polls in March.

However, he did not campaign in Azamgarh and this raised several questions in political circles even though Akhilesh Yadav's cousin Dharmendra Yadav was the SP candidate.

He had also not allowed his estranged uncle Shivpal Singh Yadav to campaign in Azamgarh.

BJP's Ghanshyam Lodhi won the Rampur seat with a margin of over 40,000 votes, defeating Asim Raja of Samajwadi Party. The BJP got 52 per cent votes while SP had to remain content with 46 per cent votes.

The SP defeat in Rampur is a personal setback for senior SP MLA Mohd Azam Khan who had worked relentlessly for the by-elections.

"This is a victory that has been converted into defeat. People were not allowed to vote and I repeatedly said this on the polling day," he said.

The twin defeats are now indicative of Akhilesh Yadav's loo

(The above story first appeared on LatestLY on Jun 26, 2022 05:00 PM IST. For more news and updates on politics, world, sports, entertainment and lifestyle, log on to our website latestly.com).