National Bikini Day 2021 Date, History and Significance: Know More About the First Two-Piece Bathing Suit Invented and How Its Popularity Spiked in The US and Europe

Every year on July 5 National Bikini Day is celebrated. The day is dedicated to bikinis and the anniversary of the invention of two-piece bathing suit. The summerwear lingerie style bathing suit didn't exist for the longest time and ever since its invention, it has been one of the most popular beachwear during summertime. 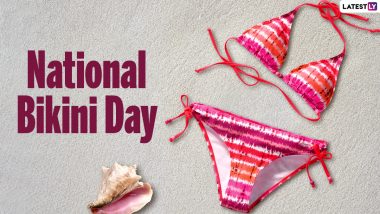 Every year on July 5 National Bikini Day is celebrated. The day is dedicated to bikinis and the anniversary of the invention of a two-piece bathing suit. The summerwear lingerie style bathing suit didn't exist for the longest time and ever since its invention, it has been one of the most popular beachwear during summertime. Bikinis make you feel comfortable on the beach, it allows you to tan perfectly and also makes up for sexy attire. There are various types of bikinis. Right from one of the most popular types, string bikinis to monokini/ numokini, tankini (combination of tank top and bikini bottom), camikini, hikini, thong-style bikini, sling bikini, minimini, teardrop, seekini, burqini, full-coverage bikini and ever barely-there bikinis, the variety is endless. However, you might want to know the history and significance of National Bikini Day and how to celebrate the day. From Priyanka Chopra Jonas, Bella Thorne to Selena Gomez– Bikini Ideas From Our Hollywood Hotties To Look Sexy at the Beach!

While not much is known about the history of Bikini Day, it was on 5 July 1946, that designer Louis Réard made the world's smallest bathing suit and called it as a bikini and ever since the new piece of sensuous, lingerie-style came into existence. The designer hoped his declaration of fashion would be explosive, much like the Bikini Atoll atomic tests. Bikini was named after the Bikini Atoll, where the United States carried out nuclear tests.  European women first started wearing two-piece bathing suits in the 1930s which consisted of a halter top and shorts, but only a sliver of the midriff was exposed and the navel was kept covered. The modest two-piece has appeared in the United States during World War II. Although Europe dressed the bikini eagerly after a long and arduous world war, the American sense of decency stopped them from bikini acceptance until the 1960s. The bikini today comes in all shapes, sizes, colours, and fabrics. Designers extended the trend to flatter more body shapes, which attracted more women to wear fashion.

There are different ways you can celebrate the National Bikini Day. However, since we are amid a pandemic, you might not want to head to a crowded beach for your own safety and that of the others.  The COVID-19 pandemic cases are only increasing, therefore, it is important that you protect yourself and others by avoiding public places.

(The above story first appeared on LatestLY on Jul 04, 2021 08:02 PM IST. For more news and updates on politics, world, sports, entertainment and lifestyle, log on to our website latestly.com).