All Souls' Day 2020 Date And Significance: Know The History, Beliefs And Traditions Related to the Day That Remembers the Dead

All Souls' Day 2020 falls on November 2 which is observed after All Saints Day on November 1. As per the beliefs of the Roman Catholic denomination, it is said that the prayers of the faithful on Earth will cleanse these souls and make them fit for the vision of God in heaven. People engage in prayers, remembrance events and masses. 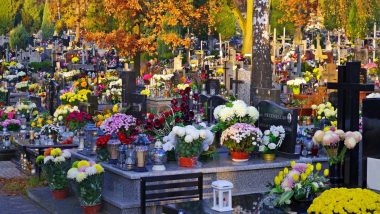 All Souls' Day 2020 falls on November 2 which is observed after All Saints Day on November 1. Halloween, the day that remembers the dead is celebrated on October 31. Hence, the three days including Halloween, All Saints' Day and All Souls' Day are called triduum of Hallowtide. It is the commemoration of All the Faithful Departed remembering the souls of those who have died. The observance is also called the Day of the Dead. As per the beliefs of the Roman Catholic denomination, it is said that the prayers of the faithful on Earth will cleanse these souls and make them fit for the vision of God in heaven. People engage in prayers, remembrance events and masses. Some people decorate the graves of their loved ones with candles and flowers. Difference Between All Saints' Day and All Souls Day 2020 Date: Know The Significance, History And Traditions of the Observances.

History, Significance and Traditions Related to All Souls' Day

All Souls’ Day was first instituted at the monastery in Cluny in 993 CE by Saint Odilo, the abbot of Cluny in France, which spread in the Christian cultures. In many cultures, the skull, which is the symbol of death, is used for All Souls’ Day in many cultures. The Anglican church is the largest protestant church to celebrate the holy day. Most protestant denominations do not recognise the holiday and disagree with the theology behind it. November 2 was chosen for All Souls' Day because before the end of the 13th century as All Saints’ Day which remembers the members of the church is celebrated on the previous day. Hence, the next day was chosen as All Souls' Day to commemorate those souls believed to be suffering in purgatory.

According to Catholic belief, the soul of a person who dies can go to one of three places. The first is heaven, where a person who dies in perfect grace and communion with God goes to. The second is hell, where those who die in mortal sin reach because of their choices. The intermediate option is purgatory, where most people, free of mortal sin, but still in a state of lesser sin, must go. Catholics believe that through the prayers of the faithful on Earth, the dead are cleansed of their sins so that they may enter heaven. The theory has often been criticised by Christian churches of other denominations.

The Eastern Orthodox Church dedicates several days throughout the year to the dead. The Western tradition of praying for the dead dates back to centuries. All Souls’ Day in Mexico is a national holiday called Día de los Muertos (Day of the Dead). Many people believe that the spirits of the dead return to enjoy a visit to their friends and relatives on this day. They visit graveyards and children enjoy tiny chocolate hearse, sugar funeral wreaths, and candy skulls.

(The above story first appeared on LatestLY on Nov 01, 2020 03:05 PM IST. For more news and updates on politics, world, sports, entertainment and lifestyle, log on to our website latestly.com).