Canada Day 2021: Know Date, History and Significance of Celebrating the Journey of the Country’s Full Independence

Canada Day will be celebrated on July 1. The day has been designated as a national holiday. Read on to more about the special day. 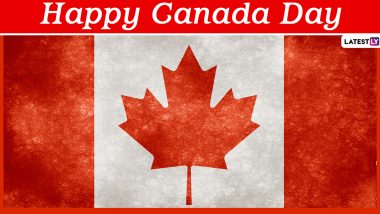 People who hail from Canada celebrate Canada Day on July 1 every year. On this day, in 1867, three separate colonies - Canada, Nova Scotia, and New Brunswick were consolidated into a single Dominion within the British Empire called Canada. Initially, Canada Day was known as Dominion Day. However, after the Canadian Constitution was patriated by the Canada Act 1982, it was renamed Canada Day. Canadians refer to this day as Canada’s Birthday. In 2017, Canada celebrated its 150th birthday. This, the country will celebrate its 154th birthday. Although, due to the COVID-19 pandemic, Canada Day will not be celebrated in a grand manner this year.

History and Significance of Canada Day

The history of Canada is different from other countries. There was a possibility of unification between the North American colonies throughout the mid-1800s. However, on July 1, 1867, when the British Parliament brought the British North America Act into effect, Canada became an independent country. The territories within the dominion consisted of Nova Scotia, New Brunswick, Upper, and Lower Canada. Canada was divided into Quebec and Ontario under this act. It also allowed provisions for neighbouring colonies to join in the future and that’s how current-day Canada formed. Until 1982, the British North America Act served as the constitution for Canada.

On the 100th anniversary of the nation’s independence, celebrations took off in 1967. However, in 1879, Dominion Day was established but it wasn’t celebrated by many Canadians. Later, when the Dominion had been renamed as Canada Day 1982, people started observing the day as Canada’s Birthday.

Canada Day has been designated as a national holiday. On this important day, the country's national anthem 'O Canada' was established in 1980, the Order of Canada was inaugurated in 1967 and in 1958, the Canadian Broadcasting Corporation's cross-country television began broadcasting.

As per Jenifer Welsh, professor of International Relations at the University of Oxford, "Canada Day, like the country, is endlessly decentralised. There doesn't seem to be a central recipe for how to celebrate it—chalk it up to the nature of the federation." However, on Canada Day, Canadians organise several outdoor activities such as fireworks, parades, concerts, barbeques, festivals, maritime and air shows. Large events popularly known as ‘Noon Show’ are being held on Parliament Hill, in the national capital Ottawa. Canadians who live in other countries also celebrate Canada Day with full spirit.

(The above story first appeared on LatestLY on Jun 25, 2021 05:17 PM IST. For more news and updates on politics, world, sports, entertainment and lifestyle, log on to our website latestly.com).