Mahashivratri 2020: From Bhang to Ganja (Marijuana), Offerings Made to Lord Shiva That Prove He Is the Coolest God of All!

Shiva is not only associated with bhang but is known as the all-encompassing Lord of cannabis. Shiva breaks all stereotypes of being a God, quite evident from the fact that he smokes chillum. These offerings made to Lord Shiva on Mahashivratri prove that he is the coolest God of all. 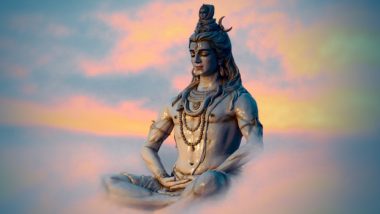 Mahashivratri 2020 falls on February 21. Lord Shiva is the Hindu mythology's ultimate badass. Allowing everything that is otherwise considered a taboo in the religion, we have a God who fearlessly makes mistakes and deals with them in a surprisingly calm way. Fun and unpredictable, Lord Shiva is a crazy mix of anger and calm and is someone whose stories of heroism has managed to appeal to every generation of people. He is not a sucker for rules and is relatively easy to please. From Bhang to Ganja (marijuana), these offerings made to Lord Shiva on Mahashivratri proves that he is the 'coolest' God of all.

One of the primary offerings made to Lord Shiva is cannabis or ganja. Legends believe that Shiva once had a heated argument with his family and wandered off into a field. He slept under a cannabis plant, and upon waking up, his curiosity led him to sample the leaves of the plant. He consumed some of the cannabis and instantly felt rejuvenated. This prompted Lord Shiva to adopt marijuana as one of his favourite indulgences.  Maha Shivratri 2020: From Bhang Ke Pakode to Bhang Sweets, DIY Recipes You Can Try Instead of Thandhai, This Mahashivratri (Watch Videos).

In another version of the story, it is believed that gods and demons came together to churn the ocean and obtain Amrita, the drink of immortality. Halahala, was a by-product of this churning whose fumes are so poisonous that it could kill both gods and demons. Shiva who drank this poison to protect everyone was later offered bhang to cool down. Know About These Tallest Shiva Statues in India; See Pics.

Bel leaf is said to be Lord Shiva's favourite, but do you know why? Legends believe that bel grew from Parvati's perspiration, which then fell to the ground while she performed penance. Bel leaves have a cooling effect, which is why it is offered to the deity on the occasion of Mahashivratri. Mahashivratri 2020: This Flavourful Bhang Thandai Will Take You on a Refreshing Trip to Paradise!

Lord Shiva is believed to perform 'tandava' Mahashivratri that depicts the cycle of the creation, and destruction of the universe. Soothing ingredients like milk and honey are offered to calm the hot-tempered deity. Shiva is also believed to be an ardent lover of milk, which brings all his devotees together on Mahashivaratri with their abundant offerings of milk.

Only offerings like this do justice to the coolest God ever. From wearing tiger skin to smoking a chillum and smearing his body with ash, Shiva has a personality, unlike other gods. He is the God who dances with a free mind, the one who leads a simple life.

(The above story first appeared on LatestLY on Feb 20, 2020 09:15 PM IST. For more news and updates on politics, world, sports, entertainment and lifestyle, log on to our website latestly.com).