Mother's Day 2021 Date, History and Significance: Everything You Want to Know About the Celebration Dedicated to the Creator of Our Existence 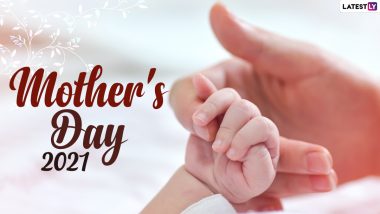 Mother's Day is dedicated to the creator of our existence.  If you do not know when Mother's Day is in 2021 and wondering date, then let us tell you that Mother's Day 2021 will be celebrated on Sunday, May 9. Mother's Day is celebrated on the second Sunday of May every year. There is a difference of opinion among experts about its introduction, due to which it is celebrated on different dates in many countries. On this occasion, children will spend a special moment with their mother. If someone is giving them a gift, then someone will be sharing their affection through rows.

When and Why is Mother's Day Celebrated?

There has always been a disagreement across the world regarding the date of Mother's Day. Mother's Day is celebrated in Bolivia on 27 May. The reason for this is the revolution of May 27, 1812, in which the Spanish army brutally murdered the Bolivian women, who were fighting for independence. Mother's Day is celebrated on 27 May in honor of those women. At the same time, the people of Greece celebrate this festival on the second Sunday of May every year for their affection and respect for their mother. Mother's day is also celebrated in India on this date.

There is also another history of Mother's Day, it is said that Mother's Day started from America in 1912. The American activist named Ana Jarvis loved her mother dearly. He never married. He started this day to express love after the death of his mother. Which was later celebrated on May 10 all over the world.

(The above story first appeared on LatestLY on Apr 27, 2021 03:51 PM IST. For more news and updates on politics, world, sports, entertainment and lifestyle, log on to our website latestly.com).