Shankaracharya Jayanti 2022 Date, Shubh Muhurat & Significance: From Puja Vidhi to History, Everything To Know About This Auspicious Day Dedicated to the Incarnation of Lord Shiva 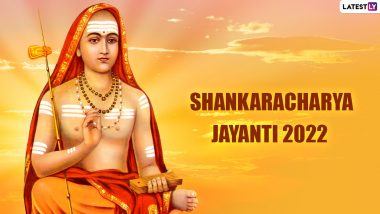 The month of Vaishakh holds special significance in Sanatan Dharma. This month sees Lord Sri Hari incarnate as Parashuramji, the great poet Surdas ji and Adi Shankaracharya, the incarnation of Lord Shiva (Shiva Avatar) was also seen. Shankaracharya Jayanti is considered to be one of the most sacred and religious festivals amongst Hindus. This day symbolizes the birth of Adi Shankaracharya, who is considered to be the incarnation of Lord Shiva as well. He is known as Jagadguru who preached Vedic knowledge. This special day is celebrated with great enthusiasm and fervour. Havan, Pujan and Satsanga are organized in the monasteries like Sringeri Sharda Peetham established in Kerala, Kanchi Kamkoti Peeth, in Kanchipuram etc. Discussions and speeches on Sanatan Dharma are also held on this day. May 2022 Holidays Calendar With Major Festivals & Events.

Adi Shankaracharya had taught everyone about the belief and philosophy of Advaita Vedanta. He was instrumental in teaching the basic principles of Upanishads, Bhagavad Gita and Brahmasutras to all. He travelled to different countries to revive Hinduism. He established four monasteries in four different corners of the country namely Sringeri in the south, Kashmir in the north, Puri in the east and Dwarka in the west.

About 2500 years ago, there was a time when harmony didn't exist and mankind was deprived of holiness and spirituality. During that time, all the sages and deities sought help from Lord Shiva to awaken the world. To help them, Lord Shiva agreed to be born on earth. He was incarnated as Adi Shankaracharya in a small village in Kerala whose name was Kaldi. They were born to mother Aryamba and father Sivaguru, they were a Namboodri childless, Brahmin couple. He had a dream in which Lord Shiva informed him that he would soon be born as his child who would have a short life span but would be highly recognized as an excellent philosopher. Soon after that Shankaracharya was born.

(The above story first appeared on LatestLY on May 05, 2022 10:23 AM IST. For more news and updates on politics, world, sports, entertainment and lifestyle, log on to our website latestly.com).