Thiruvalluvar Day 2020 Date: Significance, History of the Day Celebrated in Honour of the Great Poet & Author of Thirukkural 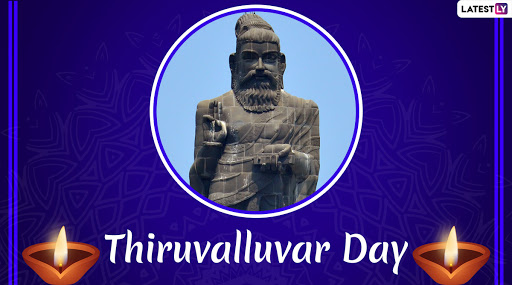 Thiruvalluvar was a great poet and philosopher and is regarded as a cultural icon by Tamils. He is best known for his work as the author of Thirukkuṛaḷ, a collection of couplets on ethics, political and economic matters, and love. It is one of the most cherished works of Tamil literature. Thiruvalluvar Dons Saffron Robe And Rudraksha in Photo Tweeted by Tamil Nadu BJP, Image Creates Massive Controversy.

Thirukkural contains 1330 couplets (kurals) that are divided into 133 sections of 10 couplets each. The text is divided into three parts with teachings on dharma, artha, and kama (virtue, wealth and love).

Not much is known about Thiruvalluvar’s life and the earliest references of the poet are found in the text Tiruvalluva Maalai. Reportedly, neither his actual name nor the title of his work can be determined with certainty and infact the text doesn't recognise Thirukkuṛaḷ.

Legends say that he lived in the town of Mylapore, a neighbourhood in present-day Chennai and flourished between the 4th century and 6th century.  Infact, there has been serious debate even related to the century in which he lived with some accounts saying that he lived from 8th to 9th century.

The Government of Tamil Nadu initiated the idea of celebrating the fourth day of Pongal Celebrations as Thiruvalluvar day. This day is thus celebrated in honour of the great man of literature and his contribution in Tamil literature. Thirukkural is regarded as a holy book by many and it serves as a guide several and shows people the right path to chose in their way of life.

How is the Thiruvalluvar Day celebrated?

His followers start the day by garlanding Thiruvalluvar's statue. At schools and colleges, literary discussions and debates take place, where students participate with full enthusiasm. People visit Valluvarkottam, which is the memorial for Thiruvalluvar and it also has an auditorium for literary works. The auditorium is so big that it can accompany 4,000 people at a time. There is also a  133-foot tall statue of Thiruvalluvar at Kanyakumari.