Types of Khichdi To Eat on Makar Sankranti 2022 for Good Luck: Taste Different Khichdi Recipes From Around India

This famous South Asian cuisine prepared with rice and lentils (dal) is everyone's favourite as it is believed eating khichdi on Makar Sankranti brings good luck and prosperity. On that note, here are six types of khichdi and recipes from around India that one must prepare and celebrate Makar Sankranti 2022! 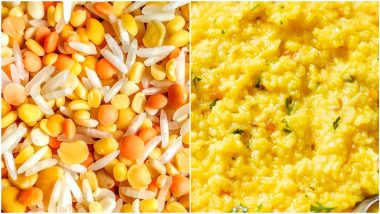 Makar Sankranti is one of the first festivals celebrated in the new year and is considered highly auspicious in the Hindu calendar. The harvest festival commemorates the sun's journey back into the northern hemisphere, touted to be an auspicious event. This year, Makar Sankranti 2022 will fall on January 14 (it falls a day later on January 15 during a leap year). Now, Makar Sankranti is associated with lavish feasts. People relish winter sweets like til-gud laddoo, gajak, til rewari and so on. But one delicacy, rather a plain-jane dish that stands out the most during the festive occasion is Khichdi or Khichri. Yes, this famous South Asian cuisine prepared with rice and lentils (dal) is everyone's favourite as it is believed eating khichdi on Makar Sankranti brings good luck and prosperity. On that note, here are six types of khichdi and recipes from around India that one must prepare and celebrate Makar Sankranti 2022! Makar Sankranti 2022 Rangoli Designs, Kolam Images, Easy Sankranthi Muggulu Patterns To Decorate Your House on Uttarayan.

Why is Eating Khichdi Considered Auspicious on Makar Sankranti?

According to Hindu mythology, Goddess Jwala Devi once invited all the saints, including Hindu God Gorakhnath, a reincarnation of Lord Shiva, for a feast at her abode in Kangra. However, the Hindu yogi became displeased upon seeing the feast consisted only of non-vegetarian items. He informed Jwala Ji of eating only 'khichdi' and asked her to keep water boiling and that he would return with ingredients for khichdi as alms once his 'khappar' (bowl) filled up. Hearing this, Jwala Devi realised Gorakhnath would probably not return to resume the feast, angry over the presence of non-vegetarian food items. Nevertheless, she kept water for boiling.

Meanwhile, God Gorakhnath left Jwala Devi's abode and began travelling before taking at Gorakhpur. While he was meditating, people began donating 'khichdi' in his bowl on Makar Sankranti, but the bowl never filled up despite numerous donations. And one believes the water is still boiling in the kund at Jwala Ji.

It is advised that eating khichdi on Makar Sankranti pleases God Gorakhnath. This is why month-long Khichdi Mela is also observed at the premises of Shri Gorakhnath Mandir in Uttar Pradesh. Thousands of devotees offer khichdi to Gorakhnath Baba on Makar Sankranti. This festival also represents the spirits and zeal of farmers, which is why one prepares khichdi with freshly harvested rice and lentils recognising farmers' efforts and contribution. Happy Makar Sankranti 2022!

(The above story first appeared on LatestLY on Jan 06, 2022 03:57 PM IST. For more news and updates on politics, world, sports, entertainment and lifestyle, log on to our website latestly.com).