The actress nailed one of the most difficult asanas that are there. Anushka posted a picture while performing the Shirshasana pose on her social media and we think she did a great job! 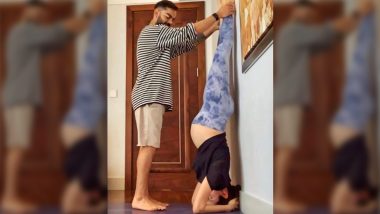 Anushka Sharma has been enjoying her pregnancy days so far and has inspired many other pregnant women with her busy yet inspiring journey. The actress is making sure she takes care of herself during this period and has not let the pregnancy come in the way of her fitness. The actress is an avid fan of yoga and is making sure she practices her favourite asanas even now. Anushka Sharma Shares Cute Pics with Her Doggo While Practising Oil Pulling! Know More About Kavala or Gundusha, Types of Beneficial Oils and Benefits of the Ancient Ayurvedic Practice.

The actress nailed one of the most difficult asanas that are there. Anushka posted a picture while performing the Shirshasana pose on her social media and we think she did a great job! She captioned the picture as, "This exercise is ‘hands-down’ (and legs up) the most difficult one 🤓 #throwback" and went on to talk about how she has been practising yoga after talking to her doctor and is enjoying it more than ever.

What's even more adorable about the picture is that we see Anushka's hubby Virat Kohli helping her while she does the pose. Anushka mentioned him in her post as well. Anushka Sharma and Natasa Stankovic Wore the Same Black Polka-Dotted Dress During Pregnancy and Internet's Obsessed With It.

On the work front, Anushka has been very peppy while working on different projects. As for her hubby, he is currently in Australia for the ongoing Australia-India cricket series. He will be returning to India very soon as he had been granted paternity leave.

Virat and Anushka dropped the pregnancy news in August with a cute post. She posted a picture showing her belly and wrote, "And then, we were three! Arriving Jan 2021."

(The above story first appeared on LatestLY on Dec 01, 2020 12:37 PM IST. For more news and updates on politics, world, sports, entertainment and lifestyle, log on to our website latestly.com).