Pig Hearts Could be Used for Humans? Xenotransplantation is Possible Within 3 Years Says UK Surgeon Who Conducted First Heart Transplant 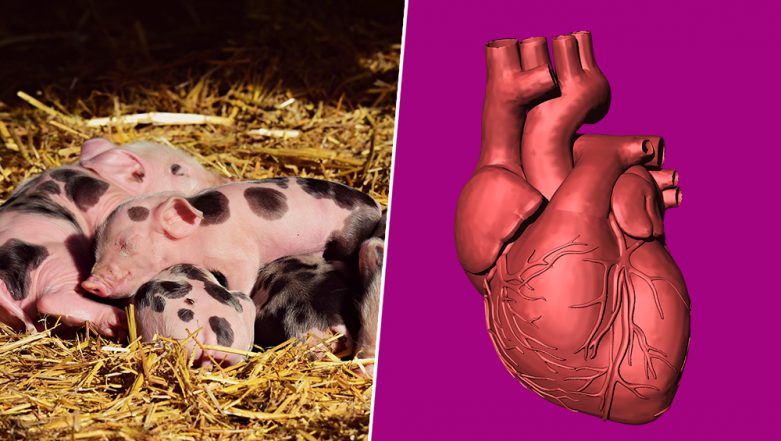 Sir Terence English, Britain's surgeon who performed the first heart transplantation in the UK 40 years ago has made an important revelation about pig hearts. On the 40th anniversary of performing a successful heart transplant, he said that pig hearts could be transplanted into humans within just three years. He mentioned that this year, his protege will try to replace a human kidney with that of a pig. And if that is a success, it can work for other organs too. This process is called xenotransplantation, which means grafting or transplanting organs or tissues between humans and animals. And success would mean the eradication of organ donors. Pig-to-Baboon Heart Transplant Offers Hope for Xenotransplantation In Humans: Everything About Cross-Species Organ Transplant.

Sir Terence, 87-year-old, spoke to the Sunday Telegraph about the advancement in the field of medicine today. Talking about replacing organs with that of pigs he said, "If the result of xenotransplantation is satisfactory with porcine kidneys to humans then it is likely that hearts would be used with good effects in humans within a few years. If it works with a kidney, it will work with a heart." Currently, the demand for organ donors in the UK is more compared to the supply. Almost 280 people in UK are on the waiting list to get themselves a new heart to replace.

This equation has led scientists to look for other options to get organs, pointing out that animal hearts could replace humans. And pigs are the best hope for a successful human transplant. The reason big, the size of human and pig hearts is the same. Professor Christoper McGregor, who was the senior registrar for Sir Terence, is now working on making genes that will allow pig's organs to function in a human body. And he thinks the process can be tested in just a few months. World Organ Donation Day 2019: Want to Be a Donor? 6 Things You Should Consider Before Donating an Organ.

Sir Terence also added that the process of xenotransplantation will also see a protest from the animal activists. He said, "There will be animal rights people who will say it's entirely wrong. But if you can save a life isn't that maybe a bit better?" Currently, experiments are being carried out by scientists in gene adaptation, to test if pig organs can function in monkeys. If that goes on successfully, then pig organs can replace in human transplants too.