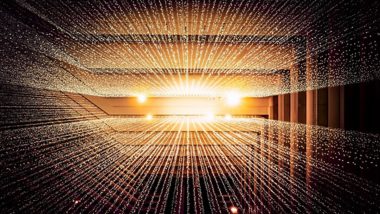 NEW YORK, June 10, 2021 Venus Acquisition Corporation (Nasdaq: VENA) ("Venus"), a publicly traded special purpose acquisition company, and VIYI Algorithm Inc. ("VIYI Algo"), a Cayman Islands exempted company controlled by WiMi Hologram Cloud, Inc. (NASDAQ: WIMI), announced today that they have entered into a definitive merger agreement. A newly created merger subsidiary of Venus will be merged with and into VIYI Algo with VIYI Algo being the surviving entity and becoming a wholly owned subsidiary of Venus. Upon closing of the transaction, Venus will change its name to MicroAlgo Inc.

In the mid-to-long term, VIYI will continue to adhere to its strategic mindset. By improving upon each iteration of VIYI's one-stop intelligent data management solutions made possible by VIYI's proprietary central processing algorithm services, VIYI can help customers to enhance their service efficiency and make model innovations in business, and actively enhance the industry value of the central processing algorithm services in the general field of data intelligent processing industry.

VIYI derives its revenue primarily from (i) central processing algorithms services for the internet advertisement and internet gaming industries and (ii) intelligent chips and services, including software development.

VIYI enjoys stable and long-term strategic alliances with many of its customers in the internet advertisement, gaming, and intelligent chip design and development. VIYI's customers are internet advertising integration agencies, online game developers and distributors, electronics manufacturers, and internet information infrastructure service providers who have entered into a master agreement with VIYI and used its services according to such agreement during the relevant contact period. VIYI's customers typically enter into a master agreement with VIYI for a fixed term, which means VIYI is constantly communicating with its customers to help them explore needs or applications which may be optimized. Once that need is identified, VIYI's customers send in a separate request for service engagements or products, or both. VIYI's involvement in its customers' process of identifying needs means they count on VIYI as trusted advisors to introduce them to industry trends and VIYI's latest technological developments. This close collaboration creates a synergistic effect between VIYI and its customers, which results in high customer loyalty.

VIYI leverages its fixation on staying in the forefront of technological development to help customers explore solutions and needs that are yet to be identified. VIYI then provides proprietary central processing algorithm solutions to meet those needs.

According to the CIC Report, benefiting from the development of IoT, cloud computing technology, and the increasing government investment, artificial intelligence market size is in the process of speedy expansion, and it is expected that the scale of core industries will reach RMB 400 billion by 2025, representing an increase of RMB 350 billion between 2020 to 2025. The development of the artificial intelligence market will drive the growth of the central processing algorithm intelligent chip optimization solution industry.