It took Shyam Ramesh just about 2 hours to develop it. While he initially also used it to set an alarm or listen to some jokes, he decided to look beyond the conventional use. 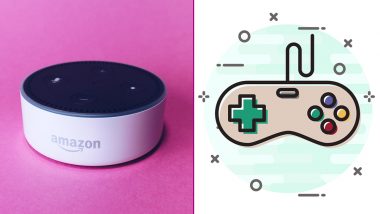 It is unfortunate to see most kids these days glued to smartphones, computers or TV to entertain themselves rather than going out and playing. Not just smartphones, today there are virtual assistance devices that are used in several houses to get the tasks done. But a 13-year-old named Shyam Ramesh from Hyderabad has made use of his machine learning to teach virtual assistant Alexa a gaming skill! Parrot Befriends Amazon Alexa, Plays Songs and Shops Online While Owner is Away.

Instead of playing games online, Shyam is more interested in what goes behind these systems, the machine functioning and how he could use it to his benefit. He read up a lot online and analysed some research tools and came up with a skill that would help him to play the information-heavy game Minecraft. It took Shyam Ramesh just about 2 hours to develop it. While he initially also used it to set an alarm or listen to some jokes, he decided to look beyond the conventional use.

He was quoted in a TOI report, "First, I had to programme the front-end, which means what the user would do to interact with Alexa and what they would say to activate the skill.Then I worked on the back-end to see how it would respond to different commands." To ensure if it works, he tested it out with his friends. And Shyam is confident this new skill would benefit a lot of gaming community out there who loves playing the particular game Minecraft. Mom Catches 6-Year-Old Using Amazon Alexa to Finish His Maths Homework, Funny Video Goes Viral.

The game Minecraft was developed in the year 2009 by a Swedish programmer Markus Persson. The game's popularity grew so much that it is now among the best-selling games of all times. Amazon's Alexa comes with a set of its skills but it also gives an option to publish a skill to a developer. But the skill has to be certified to meet their requirements, only then it can published. So it is possible that anyone with a little or no coding knowledge can also develop and publish skills. And we are sure with Shyam Ramesh's talent and understanding, the gaming community is going to be happy, to have Alexa help them win.

(The above story first appeared on LatestLY on May 21, 2019 02:29 PM IST. For more news and updates on politics, world, sports, entertainment and lifestyle, log on to our website latestly.com).