One of the most popular faces from the Telly world, Arun Govil, who played the role of Lord Ram in Ramanand Sagar's Ramayan has joined Bharatiya Janata Party. And as soon as this news was out, Twitterati went crazy and churned funny memes and jokes. Have a look. 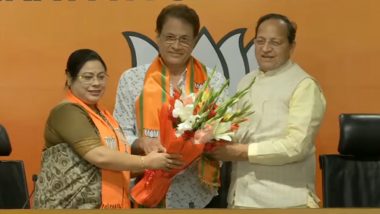 One of the most popular faces from the Telly world, Arun Govil, who played the role of Lord Ram in Ramanand Sagar's Ramayan has joined Bharatiya Janata Party. Yes, you heard that right! Ahead of assembly elections to four states and a Union territory, this move by BJP might prove fruitful to them considering that the actor is a well-known personality. As soon as this news broke on the internet, many poured in congratulatory messages for the star, but there were also a few who churned funny memes. Arun Govil, Who Played Lord Ram in Ramayan TV Series, Joins BJP.

Right from using one-liners from his hit mythological show to even bringing Bollywood in the meme game, netizens seemed to be in a fun mood. Amid the lockdown phase, Arun Govil's Ramayan was aired once again which had gained the highest TRPs. Coming back to the news of the actor joining BJP, here, check out some hilarious memes below. Arun Govil and Sunil Lahri Look Strikingly Handsome in This BTS Picture From Their Ramayan Days and We Just Can't Stop Staring.

I respect you a lot but pic.twitter.com/nIylX4RR8f

Shri ram ji after realising there are more Ravans here in India than Lanka pic.twitter.com/OEtk3vnQ6j

Gurmeet Choudhary, Are You Listening?

Govil's iconic show Ramayan initially aired in 1987. Apart from this serial, he has also played the lead character in several Hindi, Bhojpuri, Odia and Telugu films. However, he is mostly known as Lord Ram. Congratulations to him on entering politics. Stay tuned!

(The above story first appeared on LatestLY on Mar 18, 2021 07:04 PM IST. For more news and updates on politics, world, sports, entertainment and lifestyle, log on to our website latestly.com).