Bhagat Singh Birth Anniversary: Twitterati Pay Tribute to The Revolutionary Freedom Fighter on His 112th Birthday With His Quotes and Images

On Bhagat Singh's 112th birth anniversary today, netizens remember him fondly and are sharing his quotes as a way of paying tribute to the legendary freedom fighter. Bhagat Singh is trending on Twitter with his quotes, images and photos being shared by many people. 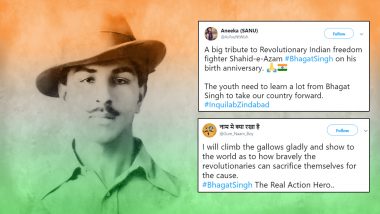 Bhagat Singh was a great freedom fighter who played a revolutionary role in the Indian freedom struggle. Born on September 28, 1907, today marks his 112th anniversary. Popularly also known as Shaheed-e-Azam Bhagat Singh, he sacrificed his life at the age of just 23. His young sacrifice also left behind a cult which was an inspiration to many to continue with the freedom struggle. On his 112th birth anniversary today, netizens remember him fondly and are sharing his quotes as a way of paying tribute to the legendary freedom fighter. Bhagat Singh is trending on Twitter with his quotes, images and photos being shared by many people.

Bhagat Singh plotted to kill the Superintendent of Police James Scott in Lahore. Scott had ordered to take action against the independence movement led by Lala Lajpat Rai. Bhagat Singh was hanged along with his other fellow fighters Rajguru and Sukhdev in the Lahore jail on March 23, 1931. His role in India's freedom struggle has also been reiterated in several movies. So he left quite a mark on the generations to come. People on Twitter are thus paying a tribute to the young revolutionary on his birth anniversary. Bhagat Singh 112th Birth Anniversary: Where Was He Born? Was Bhagat Singh Married? Know Everything About The Life of Indian Freedom Fighter Who Was Hanged at 23.

Check Some of The Tweets on Bhagat Singh:

"They may kill me, but they cannot kill my ideas. They can crush my body, but they will not be able to crush my spirit." - #BhagatSingh

The real heroe of Indian independence.

The inspiration of the country! Shaheed-e-Azam Sardar #BhagatSingh ji, a great personality who fearlessly sacrificed himself to inspire a nation.

Inspiration to the Youth

The youth need to learn a lot from Bhagat Singh to take our country forward. #InquilabZindabad pic.twitter.com/DuTylgHlrh

We Salute #BhagatSingh, the immortal hero of the Indian independence movement on his birth anniversary today. We vow to continue his fight in the path of struggle for an egalitarian society free from injustice, discrimination and inequality.#OnThisDay pic.twitter.com/eZMQa9geMy

(The above story first appeared on LatestLY on Sep 28, 2019 08:51 AM IST. For more news and updates on politics, world, sports, entertainment and lifestyle, log on to our website latestly.com).