Bird Falls on Delhi Metro Tracks Due to Dehydration, Rescued

A rescue team from the NGO swung into action when a DMRC train operator saw the bird stranded on the tracks. 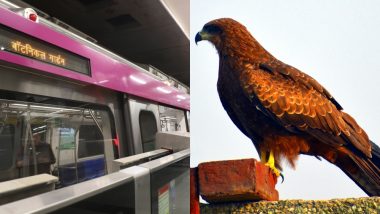 New Delhi, April 11: Services on Delhi Metro's Magenta line were temporarily halted after a bird fell on the train tracks. The bird is now safe, officials said. On Wednesday night, the Black Kite bird, which was later found to be exhausted and dehydrated, had a close brush with death after collapsing on the Metro tracks running between Botanical Gardens and Okhla Bird Sanctuary Metro Stations, non-profit Wildlife SOS said in a statement. Dead Parrot Photo From Kite Festival During Makar Sankranti 2019 Is Heartbreaking; See Viral Pic.

Delhi Metro Rail Corporation (DMRC) officials said the incident took place around 9 p.m. and affected services on the Janakpuri West-Botanical Garden line for about 30 minutes. A rescue team from the NGO swung into action when a DMRC train operator saw the bird stranded on the tracks.

"The bird was under observation for a few hours and was released back into its natural habitat post recovery," the NGO said, warning that the number of birds being affected by the scorching heat is bound to escalate in the months to come.

(The above story first appeared on LatestLY on Apr 12, 2019 12:07 PM IST. For more news and updates on politics, world, sports, entertainment and lifestyle, log on to our website latestly.com).