BTS RM aka Kim Namjoon’s Reply on ‘Staying True to Yourself’ Make Us Shout - Oppa Please Be Our Maths Teacher!

This reply bowled over both die-hard fans as well as new supporters of BTS. They were impressed by RM for putting his thoughts into words so carefully. 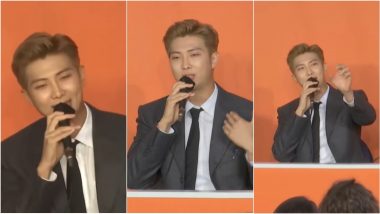 RM, aka Kim Namjoon, is the best leader. The 27-year-old has made ARMY fall in love with his sincerity, dedication and capacity to articulate his and the band's vision. After all, not everyone can boast of an IQ of 148! Time and again, Namjoon has proven his genius, but this one video from BTS' global press conference at SoFi Stadium in Los Angeles held in November 2021 is making us simp for RM.

Celebrity Interviewer Liam McEwan shared a clip from the interview with BTS, and RM's answer to his question will leave swooning over Namjoon. Liam asked the group, "You've always been humble, but you've always believed in yourself. How do you manage to stay true to yourselves amongst all the success?" ‘Namjoon Boyfriend’ Trends on Twitter After BTS Leader RM Posted a Pic With Friend Hiding The Face With Heart Emoji!

Namjoon sticking to his wholesome articulate personality, replied, "It's very simple. There's 100 percent of success. I'll give 50 percent to ARMY, I'll give half to ARMY. Thirty-five percent is thanks to the members, with every member accounting for 5 percent each, and the rest of it is thanks to HYBE and Big Hit Music. If you think about it as a trophy, only a small corner of that trophy is ours. If I think about it as a success achieved together by many people, I will inevitably stay humble, and that's an important mindset to have while living on as myself. [sic]"

J-Hope and RM of @BTS_twt answer my question on staying true to yourself.

This reply bowled over both die-hard fans as well as new supporters of BTS. They were impressed by RM for putting his thoughts into words so carefully. Liam's comment section was filled with comments praising RM's love for maths and numbers and percentages. One fan writes, "Imagine getting into an argument with this man!!😂😂😂😂," while the other comment reads, "Homie going all in with the hardwork percent distribution though #sexybrain 😂😉💜" One cool comment was, "The 2nd point is he great at Math, please teach us." There were more similar comments with fans asking Namjoon to be their Maths teacher, like this one: "Joon please be my teacher 😩" It indeed would be a dream come true if RM becomes ARMYs' Maths teacher.

(The above story first appeared on LatestLY on Dec 16, 2021 10:38 PM IST. For more news and updates on politics, world, sports, entertainment and lifestyle, log on to our website latestly.com).