A video of a little boy with cerebral palsy skateboarding is going viral on the internet. The mother revealed how the device was not her own creation. In a series of tweets, she spoke about her son's condition and how she fulfilled his dream with the help of adaptive technology. 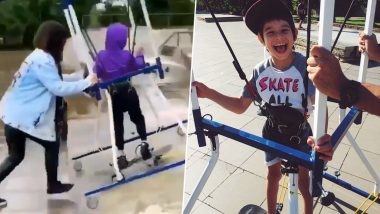 A video of a little boy with cerebral palsy skateboarding for the first time is going viral on the internet. The joy and smile on his face after being able to skateboard have moved many to tears. The video shows his mother running along with him in a device and she too shares the same joy. The video is indeed precious and got viral when a Twitter user mentioned she made the device for her son. So while she is receiving all the praises for being such a wonderful mother, she has given the due credits to adaptive technology and even revealed how she made this dream come true for her son. Baby Talking in Gibberish Complaining About His Mom Leaving For Work Without Giving Him Goodbye Kiss is Hilarious; Video Goes Viral.

Cerebral palsy, a childhood disability, affects motor movement and muscle coordination due to abnormal brain development. Little João from Brazil suffered from a stroke when he was two years old and got cerebral palsy. He always had a dream of skateboarding. His mother Lau Patron helping him to skateboard caught fancy of the internet and she was called the mother of the year. A Twitter user mentioned how she was the one to create a device for her son. As it went viral, Lau Patron decided to narrate the entire story to everyone on the internet. Little Boy’s Angry School Photo Goes Viral; Mom Says Pictures Were Used Without Permission.

He has Cerebral Palsy and wanted to skate board so his mom created this for him so that he could.

Mother Of The Year pic.twitter.com/S97bk8jBAS

The video has got over 15 million views and 2 lakh plus retweets. Happy and emotional reactions pouring in for the mom's dedication. But the mother revealed how the device was not her own creation. In a series of tweets, she told about the company Skate Anima which has helped to fulfil her child's dream. While the current video is being called the little one's first time, she showed the actual footage when João skateboarded for the very first time.

[THREAD] well, we go viral and apparently - according to this tweet - I'm the "mother of the year":https://t.co/7wPKM0lOKF

i’m mom of the smiling boy skating who has cerebral palsy. his name is joão, he's 7 years old, and this other video is from the first time he felt it: pic.twitter.com/UCvnjj4YUR

Crediting the makers of the adaptive technology, she sums it up with, ". places that don’t welcome everyone are disable, ideas are disable, planning, education, design. not people. 1 billion people. 1/7 of the world. inclusion is not a favor." She added that her son is like any other boy today and we need more such tools to make everyone inclusive in this world. The story is indeed inspiring and gives a thought about how we need to treat people with disability with equal respect and develop ideas to help them too.

(The above story first appeared on LatestLY on Oct 24, 2019 11:45 AM IST. For more news and updates on politics, world, sports, entertainment and lifestyle, log on to our website latestly.com).