Several fakes news are going viral these days at a time when the world is struggling to deal with coronavirus. One such fake news claimed that 5G network radiations are the reason beg=hind the surge in COVID-19 cases in India. 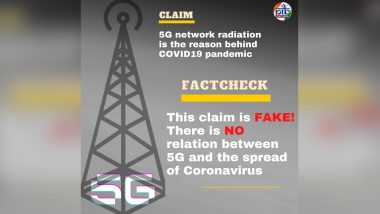 New Delhi, May 21: Several fakes news are going viral these days at a time when the world is struggling to deal with coronavirus. One such fake news claimed that 5G network radiation is the reason behind the surge in COVID-19 cases in India. However, the PIB Fact Check team termed the claim made by the viral social media posts as fake.

The PIB Fact Check added that there is no relation between 5G and the spread of coronavirus, and the testing of the 5G network has not yet started anywhere in India. Notably, similar messages also surfaced in the past. The centre time and again denied these claims. The PIB Fact Check also shared a press release by the government. COVID-19 Second Wave is Nothing But Effect of 5G Network Testing? PIB Fact Check Debunks Fake Viral Audio Message.

In the press release, the Ministry of Communications had said, “ It has come to the notice of the Department of Telecommunications (DoT),  Ministry of Communications that several misleading messages are being circulated on various social media platforms claiming that the second wave of coronavirus has been caused by the testing of the 5G mobile towers. As per a press statement issued by DoT these messages are false and absolutely not correct.” Second Wave Is Not Really COVID-19 But Effect of 5G Tower Radiation Making Air Poisonous and Causing Breathing Issues? Know the Truth Behind Fake Post.

Is 5G network radiation the reason behind #COVID19 pandemic⁉️

◾This claim is #FAKE

◾There is NO relation between 5G and the spread of #Coronavirus

Last week also a viral audio message claimed that the second wave of COVID-19 is nothing, but it is actually the impact of 5G network testing. It further claimed that people are dying due to the testing and not because of COVID-19. At that time also, the PIB Fact check debunked the fake audio message and had asked people not to believe in rumours.

In 2020, when the COVID-19 pandemic broke out, similar messages went viral, claiming that 5g network radiations were behind deaths worldwide and there was no coronavirus. These messages surfaced again at the time when the second COVID-19 wave wreaked havoc in India.

LatestLY advises its readers not to believe in such fake messages and always check official websites of the various government ministries to verify these types of messages.

Fake viral posts claimed that 5G network radiation is the reason behind the COVID-19 pandemic.

The PIB Fact Check termed the claim as fake. It added that there is no connection between the 5G network and coronavirus.

(The above story first appeared on LatestLY on May 21, 2021 06:27 PM IST. For more news and updates on politics, world, sports, entertainment and lifestyle, log on to our website latestly.com).