The mental health advocate tried to promote healthy body image by trying on the white lace bra she wore five years ago on the runway. The bra is size 30A. Now, Malcolm says she's "a size 34B which is healthy for me." 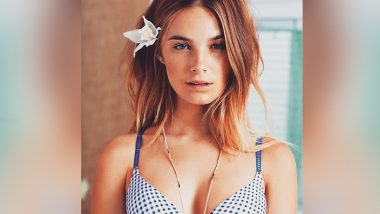 Model Bridget Malcolm calls out Victoria's Secret for perpetuating unhealthy body image.  In a Tik Tok video, Malcolm pulled out the same bra she wore on the 2016 Victoria's Secret Fashion Show to reveal how her body has changed since walking the victoria secrets catwalk. The mental health advocate tried to promote healthy body image by trying on the white lace bra she wore five years ago on the runway. The bra is size 30A. Now, Malcolm says she's "a size 34B which is healthy for me." In 2017, when Malcolm auditioned for Victoria's secret again she was rejected as her cup size had allegedly increased to 30 B. In the now-viral Tiktok video, the model wore the bra over a bikini top to illustrate how the bra wouldn't fit her anymore.

"I found my bra from the 2016 Victoria's Secret Fashion Show. It is a size 30A. I am now a size 34B, which is healthy for me," Bridget explained on TikTok.

Malcolm further added that she didn't fare too well during her second audition for the brand, which promptly rejected her since she was deemed a tad too big for the catwalk. "I was rejected from the show in 2017 by [former VS CMO] Ed Razek. He said, 'My body did not look good enough,'" Malcolm said.

She pointed out that she was extremely unhappy during her runway stint. "Look how big it was on me," she said, pointing out the same bra she was trying on again in the video. "The sadness behind my eyes from the 2016 show breaks my heart."

She slammed the brand for perpetuating unrealistic standards for women. "Victoria's Secret, your performative allyship is a joke," Bridget concluded.

In response to Malcolm's TikTok, Victoria's Secret spokesperson told PEOPLE, "There is a new leadership team at Victoria's Secret who is fully committed to the continued transformation of the brand with a focus on creating an inclusive environment for our associates, customers and partners to celebrate, uplift and champion all women."

Two years ago the brand faced huge backlash over not embracing models of all sizes and backgrounds on its runway. Earlier this month, Victoria's Secret announced a new initiative -The VS Collective and The Victoria's Secret Global Fund for Women's Cancers. - to address those issues.

(The above story first appeared on LatestLY on Jul 01, 2021 03:24 PM IST. For more news and updates on politics, world, sports, entertainment and lifestyle, log on to our website latestly.com).