International Day for the Preservation of the Ozone Layer 2020 Funny Memes and Twitter Reactions: Twitterverse Celebrates the Day With Informative and Creative Posts 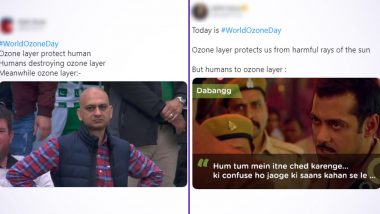 The ozone layer is extremely vital for us and we all must contribute to its healing. It has been depleting because of human activities and we owe it to mother nature. Every year, International Day for the Preservation of the Ozone Layer is observed to spread awareness about the harmful effects of humans and ways to help preserve the ozone layer from thinning. Today on International Day for the Preservation of the Ozone Layer, Twitter is flooded with funny memes that insightful and take a satirical dig at the humans for not doing enough towards the healing of the ozone layer as well as informative posts that aims at spreading awareness.

The ozone layer is a thin part of the Earth's atmosphere that absorbs almost all of the sun's harmful ultraviolet light which is otherwise extremely harmful for human beings. "Ozone holes" are being created due to the damage done to the ozone layer by pollution. It is important to conserve the ozone layer for the very survival of humans. While we spread awareness about the day, take a look at what is being shared on social media:

Ozone layer protects us from harmful rays of the sun

But humans to ozone layer : pic.twitter.com/NDto3nGUbB

As the world figures out what to do about #covid19, look at cooperation on the ozone layer for an example about how cross border solutions work for everyone.

In 1994, the UN General Assembly proclaimed 16 September the International Day for the Preservation of the Ozone Layer, commemorating the date of the signing, in 1987, of the Montreal Protocol on Substances that Deplete the Ozone Layer. pic.twitter.com/nTOyxi1Gwj

The ozone layer had been thinning since the late 1970s and scientists raised the alarm and ozone-depleting chemicals were phased out worldwide. As a result, the upper ozone layer above the northern hemisphere should be completely repaired in the 2030s and the gaping Antarctic ozone hole should disappear in the 2060s, according to a scientific assessment released at a conference in Quito, Ecuador a couple of years ago. Closer to home, according to the air quality index (AQI), released recently by the Central Pollution Control Board (CPCB), Ozone is emerging as a dominant pollutant along with particulate matter, especially in Delhi and NCR areas.

(The above story first appeared on LatestLY on Sep 16, 2020 02:37 PM IST. For more news and updates on politics, world, sports, entertainment and lifestyle, log on to our website latestly.com).