Is Annabelle Doll Real? Know True Story of Haunted Demonic Doll of The 'Conjuring' Fame That is Locked Up at The Warren's Occult Museum in Connecticut 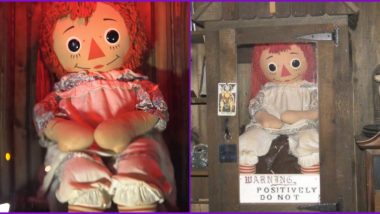 If you love reading or watching through the horror stories, haunted movies, then we have got you the story of famous Annabelle. It's a name that strikes fear, thanks to the numerous series and movies on her, the most famous being The Conjuring. If you are still unaware of the demonic doll and wondering if it is indeed a real story, we have got it all for you here. Recently, there were reports that the Annabelle doll has escaped from the occult museum in Connecticut, but it is just a rumour, thankfully! So as you heave a sigh of relief, we take you through the real story of Annabelle doll and what makes it so freaky!

The Annabelle Doll is a plain Raggedy Ann doll with red yarn hair. The story goes back to 1970s. A student nurse named Donna was gifted the doll by her mother. Donna used to stay with her roommate Angie. The girls observed that the doll would move on its own. From subtle changes in the beginning to changing positions in the house, it started being creepy. The girls would leave the house with the doll in one place and return to find it in another spot. The girls were intrigued by the doll's movements and made it a part of a seance, and found there was a spirit living in her.

The doll had a spirit of a girl named Annabelle Higgins who had died near the house where Donna lived. Some mention Higgins died in a car accident, some say she died in that home long ago. Her spirit latched on the doll. Both Donna and Angie agreed to let the spirit stay and took care of spirit-possessed doll but it resulted in bad things happening the house. She tried to attack Donna's fiance one day, that is when they decided to seek help. Paranormal Games to NOT Play at Home With Friends: The Midnight Game, One-Man Hide and Seek & Other Games Will Potentially Leave You With Your Very Own Real Ghost Story!

The doll was then taken to paranormal investigators Lorraine Warren and Ed Warren. They found out that the doll was possessed by a demonic spirit. They performed an exorcism of the house and took away the doll. But even while taking away the doll they experienced inconvenience on the way back. The doll was back to its old tricks in a week's time, moving from one place to another. It is said that Annabelle also caused near-death of Catholic church priest.

Since then, the Warrens have locked this demonic doll in a glass enclosure at The Warrens' Occult Museum in Monroe, Connecticut which also houses other paranormal object and artefacts. Till date, the real Annabelle doll stays locked up in here with a big "Do Not Touch" board. The story has inspired an entire universe of horror movie series. The Annabelle doll character is depicted in The Conjuring Universe a film series that includes the following: Annabelle (2014), Annabelle: Creation (2017), and Annabelle Comes Home (2019).

(The above story first appeared on LatestLY on Aug 15, 2020 07:12 PM IST. For more news and updates on politics, world, sports, entertainment and lifestyle, log on to our website latestly.com).