Annabelle Doll of 'Conjuring' Fame is Very Much Trapped in the Warrens' Museum, Here's The Proof That The World Is Safe From Its Paranormal Activities (Watch Video) 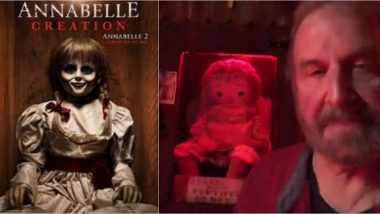 Take a deep breath people, the world is safe from the Annabelle. The doll believed to be haunted which inspired the Conjuring series has not escaped the museum. You would have come across tweets on the doll escaping but, people who know the doll close has confirmed that the news is just a rumour and not true! As social media was filled with talks about the 'haunted' dolls' escape from Warren museum in the US, there seems to be more to it. The Conjuring franchise has been a hit at the box office, garnering a combined $1.9 billion against a combined budget of $139.5 million leaving the second highest-grossing horror franchise Godzilla behind. The Conjuring 3 Will Expand the Franchise Beyond the 'Haunted House Formula', Reveals Screenwriter.

Tony Spera, the son-in-law of late paranormal investigators Ed and Lorraine Warren, took to the family's YouTube channel and confirmed Annabelle was still in her glass enclosure in the Occult Museum in Connecticut, putting all the rumours to rest. Spera in the video said, "I'm here to tell you something, I don't know if you want to hear this or not, but Annabelle did not escape." In the clip, he also moves his camera to show the infamous doll inside a glass cabinet behind him. Is Annabelle Doll Real? Know True Story of Haunted Demonic Doll of The 'Conjuring' Fame That is Locked Up at The Warren's Occult Museum in Connecticut.

Annabelle Has Not Escaped The Warren Museum:

According to popular history, the Annabelle doll is a Raggedy Ann toy from the 70s. It was given to a girl named Donna who said that the doll would always appear in different places in the house. There was also mention of notes appearing here and there in the house. A medium then told her family that the doll had been possessed by a seven-year-old girl named Annabelle Higgins, who had died in that house. Then the family called the Warrens who performed an exorcism and took her away. She put it in their basement in a locked cabinet. The real Annabelle doll is said to look much different from the porcelain doll in Conjuring films and its other Annabelle versions.

(The above story first appeared on LatestLY on Aug 15, 2020 05:52 PM IST. For more news and updates on politics, world, sports, entertainment and lifestyle, log on to our website latestly.com).