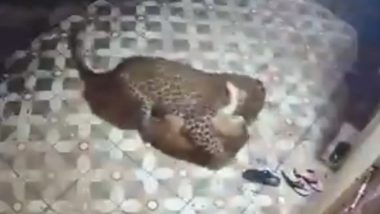 People in Ambegaon district near Pune live in fear as a leopard has been visiting the area too often. A farmer named Kaluram Lokhande lost a third dog to a leopard's attack last night, September 20. The incident took place in Shingve village of Ambegaon where a leopard leapt out of a nearby field, attacked the pet dog and took away it as its prey. The terrifying attack has been caught on CCTV camera outside the house which has been shared online. Leopard Attack in Nashik: Big Cat Injures Two People in Indira Nagar, Watch Video of Wild Animal Pouncing on Pedestrian.

As per reports, this is the third dog kept by Mr Lokhande which has been killed by the leopard within a month! The frequent attacks have people living in fear of the wild animal. Kaluram Lokhande is a farmer and has sugarcane farms where he has spotted a leopard numerous times. For safety, he recently put a CCTV camera to have a look around their home. A little past midnight on September 20, a leopard leapt out their home, attacked their sleeping pet dog and took it away. The video shows the dog struggling but the leopard clearly had his might. It barely took 10 to 15 seconds for the leopard to kill the dog and take it away as its prey! The video is sure terrifying. Leopard Enters House And Runs Away With Dog in Mouth in Karnataka's Shivamogga, Watch Chilling Video.

Looks so scary, right? It is not known yet if forest officials have been informed about this leopard on the loose. Whenever around residential colonies, leopards do target pet dogs as their prey. Something similar was seen at a hotel in Nainital in July this year. A leopard had managed to enter the house and take away the family dog. In this case, the dog w

(The above story first appeared on LatestLY on Sep 21, 2020 09:35 AM IST. For more news and updates on politics, world, sports, entertainment and lifestyle, log on to our website latestly.com).