#LokSabhaElections2019 Most Tweeted About Hashtag of 2019 in India Followed by Chandrayaan 2, CWC19, Pulwama and Article 370, Check Full List Here 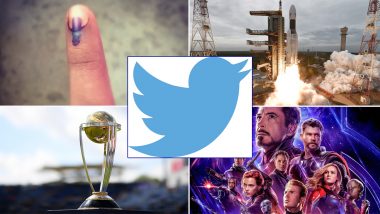 Mumbai, December 10: Twitter has released a list of the top 10 most tweeted about Hashtags in 2019 in India. The compilation of the most used hastags in India comes with the hashtag #ThisHappened2019. The most tweeted about hashtag in India this year was #loksabhaelections2019 used before and after the results of the General Elections 2019. The 17th General Elections, known as Lok Sabha Elections 2019 in India, was held from April 11 to May 19 and the counting was done on May 23, 2019. Prime Minister Narendra Modi led BJP stormed back to power with clear majority for a second term. After Lok Sabha Elections 2019, #chandrayaan2, #cwc19 (Men's Cricket World Cup 2019), #pulwama and #article370 were the most tweeted hashtags in India.

The list throws light on some interesting aspects as far as the Twitter hashgtags are concerned. Taking the number two spot is Chandrayaan2, India's mission to soft landing on Moon. Mission Chandrayaan-2 was the second lunar exploration mission developed by the Indian Space Research Organisation (ISRO), and involved of a lunar orbiter, the Vikram lander, and the Pragyan lunar rover developed in India. Chandrayaan-2 kept Indians hooked to the ISRO mission as was highly tweeted and shared on Twitter. Golden Tweet of India in 2019: Narendra Modi Tweet Celebrating BJP's Victory in Lok Sabha Elections 2019 Bags Tweet of The Year.

Check the Image Below 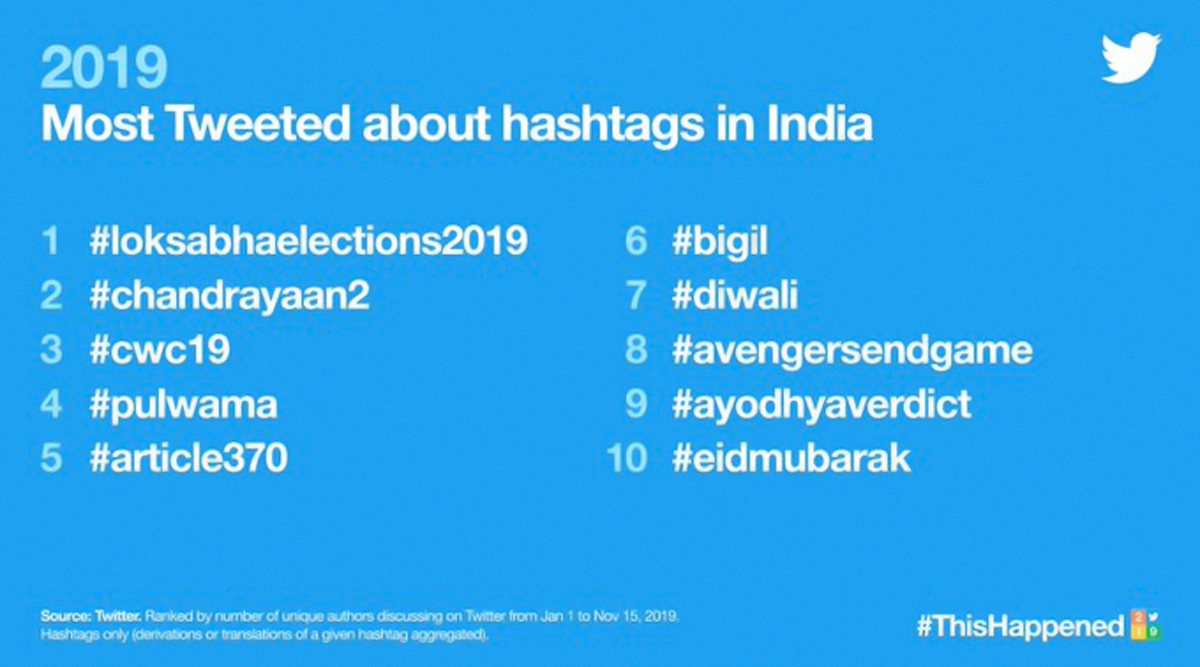 Most Tweeted Hashtags in India on Twitter in 2019. (Photo Credits: TwitterIndia)

From #chandrayaan2, to #diwali and #eidmubarak - 2019 was a year for celebrations on Twitter in India. Here are the top most Tweeted about hashtags in 2019 #ThisHappened pic.twitter.com/as1791mPzv

The top 10 hashtags tweeted about in India also contain two movies, Bigil and Avengers: Endgame. The Pulwama terror attack and Article 370 are on the fourth and fifth spot respectively. The festival of lights, #Diwali, is seventh on the list. The landmark Ayodhya verdict is ninth and #eidmubarak is at the number 10 spot. These hashtags not only inform but also makes Twitter users revisit the important events that took place in 2019.

(The above story first appeared on LatestLY on Dec 10, 2019 01:25 PM IST. For more news and updates on politics, world, sports, entertainment and lifestyle, log on to our website latestly.com).