Male humpback whales which are known for their songs that are similar to human musical traditions are now turning silent. 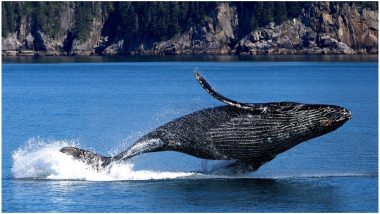 Humans have already caused immense trouble to nature and everything it withholds. Of which marine life is among the most affected and continues to reel under problems including contamination and pollution. Also, years of uncontrolled exploitation has not only deprived our oceans of its resources but impacts marine animals too.

According to a recent survey, male humpback whales which are known for their songs that are similar to human musical traditions are now turning silent. The mammals that use songs to communicate, search food and even find mates are now quiet due to the sounds of human activity. The whales in Japan are no more singing their songs especially due to shipping noises. Three Humpback Whales Breaching Are a Delightful Spectacle (Watch Video)

The research states, "From these reviews, it is possible that humpback whales have a tendency to stop or decrease their song when the noise source level is higher. The decrease in singers or songs nearby a ship trajectory observed in our study concurs with these findings." The project was carried out as a research activity of underwater noise project of the Japan Ship Technology Research Association being funded by the Nippon Foundation.

According to a new study by PLOS ONE journal, human-generated activities that causes noise pollution are forcing whales to stop singing. For the study, researchers from Ogasawara Whale Watching Association and Hokkaido University in Japan used underwater recorders around the Ogasawara Islands to examine how the noise of a single passing ship affects humpback whale songs. They recorded the singing of 26 whales from February to May 2017, examining one to three whales per day.

The researchers found out that within 500 meters of the shipping lane, only a few male humpbacks sang than quieter regions. After the ship passed, whales within 1,200 meters temporarily reduce or stop their singing altogether.  The whales that stopped singing did not resume before 30 minutes after the ship passed. ‘Rare’ Blue Whale Caught and Killed by Icelandic Whaling Company.

The research paper reads, "Humpback whales seemed to stop singing temporarily rather than modifying sound characteristics of their song under the noise, generated by a passenger-cargo liner. Ceasing vocalization and moving away could be cost-effective adaptations to the fast-moving noise source."

It further reads, "In addition, given that ship noise raises stress levels in right whales, and it was considered to be applicable to all baleen whales, stresses imposed by the continuous exposure to noise might elicit changes in singing behaviour after a ship's passage."

(The above story first appeared on LatestLY on Oct 29, 2018 11:14 AM IST. For more news and updates on politics, world, sports, entertainment and lifestyle, log on to our website latestly.com).