We are sure every 90s kid would remember being glued in front of the television along with their family members to catch the proceedings on Ramayan every Sunday. Well, not much has changed. This is a common scenario in most of the Indian households amid nationwide lockdown. Family members come together to watch Ramayan every morning and night at nine' o'clock. 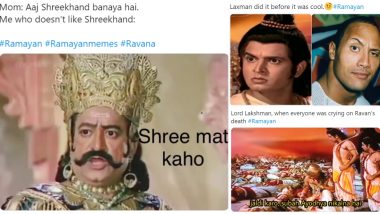 Ramayan turned the tides for Doordarshan since it re-aired on March 28 for viewers in lockdown. We all know how the Indian government took the crucial step of lockdown to contain novel coronavirus (COVID-19) outbreak. And to keep people entertained indoors, Ramanand Sagar's 1987 TV series Ramayan is playing a crucial role. Based on the great mythological epic that narrates the journey of Shri Rama, the seventh incarnation of Lord Vishnu in human avatar. It saw Arun Govil in the role of Lord Rama, Deepika Chikhalia as Devi Sita, Sunil Lahri as Lakshman, Arvind Trivedi as Ravana and Dara Singh as Hanuman. And just like the original premiere, Ramayan's cast is receiving love from all quarters in the second run as well. The new-age audience who are catching the Indian mythological series for the first time are expressing their love in the language they know best – memes. Yes, Ramayan funny memes have taken over the internet. As the serial has entered its last phase (Yes, Ravana has been killed, and Lord Rama and Devi Sita have united and returned to Ayodhya), we look at some of the hilarious memes, tweets and GIFs that made us laugh out loud. Ramayan’s Aslam Khan Funny Memes: From ‘Duggal Sahab, Aaj Kya Bane Hain’ to ‘KL Rahul of Indian Cricket’, This Supporting Actor Has Become New Meme Material.

We are sure every 90s kid would remember being glued in front of the television along with their family members to catch the proceedings on Ramayan every Sunday. Well, not much has changed. This is a common scenario in most of the Indian households amid nationwide lockdown seven days a week. Family members come together to watch Ramayan every morning and night at nine' o'clock. And dare anyone change the channel. Even watching advertisements are welcome. Such is the craze for Ramayan. People have turned into die-hard fans, especially of Sunil Lahri whose portrayal of Lakshman, Rama's younger brother is spot on. Fans are in love with Lakshman's wit and sassy comebacks. Lord Lakshman is touted as India's first 'Angry Young Man' on social media. (We must ask, how Amitabh Bachchan feels about it?) Ramayan Funny Memes and Jokes: From Ravana Vadh and Lakshman's Comebacks to Hilarious Posts about Vibhishan and Kumbhkaran, Don't Miss Any Reason To LOL Today!

Not only Lakshman but in the roles of Ravana and Hanuman, both Arvind Trivedi and Dara Singh have won everyone's heart. In fact, after a video of 82-year-old Arvind Trivedi watching himself as Ravana on the television screen and asking for forgiveness for kidnapping Devi Sita went viral, fans fell in love with him even more. The elderly actor has also officially joined the micro-blogging platform, Twitter much to the joy of TV serial fans. One also gets to watch late actor Dara Singh as the benevolent and super strong Lord Hanuman, and we cannot thank DD enough for it. On that note, let us check out some of the funniest memes on the most amazing serial of all time.

2. THEY CARE FOR YOU

This Scene has a separate Fan base ❤#Ramayan pic.twitter.com/MYXlv7CEHg

in life in life pic.twitter.com/6kZ8mJ66FM

I just changed channel by mistake.

Now onwards I only watch Doordarshan to find this man!

He could be anywhere

& the Perfect one 💜#Ramayan pic.twitter.com/Ncm4iFSAkF

When Math teacher come again in class in free period....

When DD ended ramayan 12 min early with so many ads.

Everyone to DD :-#Ramayan pic.twitter.com/6FKSOthw7y

10y old me sitting on all chairs during any wedding pic.twitter.com/lhqjZxDQpj

How're you, folks? Wasn't it a total fun ride? Out of all these, my favourite still has to be "Iske Pet Par Baan Mariye Prabhu" and Lakshman's disgusted expression while eating Shabari's joothe ber. Tell us about your favourite meme based on Ramayan serial. Jai Shri Ram!

(The above story first appeared on LatestLY on Apr 20, 2020 05:52 PM IST. For more news and updates on politics, world, sports, entertainment and lifestyle, log on to our website latestly.com).