The pulling down of Tanishq ad shows how cancel culture -- as socialists refer to the group seeking withdrawal of artistic pieces citing sentiments -- succeeded in their online campaign. Here's how a cyber bullying campaign led to an advertisement with a lovely message be withdrawn. 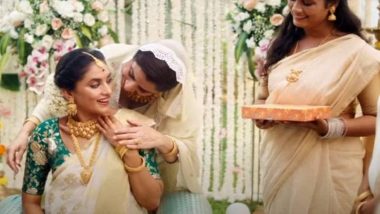 New Delhi, October 12: Jewellery brand Tanishq was forced to withdraw an ad on interfaith marriage after cyber bullying by trolls. The company was under immense flak from a section of netizens, which accused it of promoting "love jihad" -- a conspiracy theory alleging a ploy by jihadist elements to lure off and marry Hindu girls with the intent of converting them to Islam. Tanishq's Beautiful New Video Ad On Interfaith Marriage Bashed Online, Touted as 'Love Jihad', Trolls Urge People to #BoycottTanishq.

The pulling down of Tanishq ad shows how cancel culture -- as socialists refer to the group seeking withdrawal of artistic pieces citing sentiments -- succeeded in their online campaign. Here's how a cyber bullying campaign led to an advertisement with a lovely message be withdrawn.

Shame on Tanishq. Stop showing shit and propaganda disguised as advertisement. If u haven't the balls to show reality, please refrain from such moral platitudes #BoycottTanishq

#BoycottTanishq began trending across social media, particularly Twitter, since early hours of Monday as several netizens shared the clip of a Tanishq ad which showed a Muslim family preparing for the baby shower for their Hindu daughter-in-law.

The ad showed the family taking all measures to make their daughter-in-law comfortable, and they also performed Hindi rituals. The message which used India's pluralistic ethos as the foreground was aimed at promoting the Tanishq brand of jewellery ahead of the upcoming festive season.

"She is married into a family that loves her like their own child. Only for her, they go out of their way to celebrate an occasion that they usually don’t. A beautiful confluence of two different religions, traditions, cultures," read the  description of the now-withdrawn commercial.

Several Twitter users also marked their dissent over the withdrawal of Tanishq ad. A number of netizens alleged that the boycott campaign was engineered on the microblogging site by certain trolls who want the nation to remain "polarised".

'Thanks For Making Us Notice'

People tweeting on #BoycottTanishqJewelry please do something better with your life . Your BJP IT Cell stipend will anyways not be enough for you to afford the jewelry you are asking others to boycott .

And thanks btw for making us notice the ad !

Good for you @TanishqJewelry . If only we had more ads like this sensitive and brilliant one promoting love between different communities, India would be a far better place for all. Shame on trolls. #downwithbigotry

The decision to revoke the advertisement, claim analysts, was aimed at preventing further flak towards the company ahead of the upcoming festivals. With Dussehra and Diwali set to be celebrated, jewellery companies facing the heat of lockdown are hopeful of improving their sales.

(The above story first appeared on LatestLY on Oct 12, 2020 11:06 PM IST. For more news and updates on politics, world, sports, entertainment and lifestyle, log on to our website latestly.com).