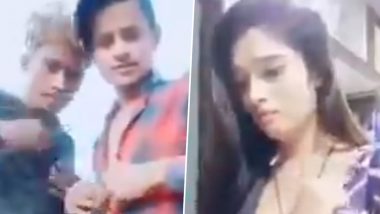 TikTok, the short video platform owned by Chinese tech giant Bytedance, is one of the most popular social media apps in India. Last year, it was the most downloaded app on the App Store and Google Play. But now people want to ban the video-sharing platform. #BanTikTok India has been trending on Twitter recently, when a controversial video of TikToker Faizal Siddiqui surfaced on the internet. The clip allegedly glorifying acid attack was forced to take down, after the National Commission of Women (NCW) warned TikTok. Now, another video surfaced online, of TikToker Mujibur Rehman, glorifying rape on the video-sharing platform. Rekha Sharma, the chairperson of NCW, tweeted urging the government to ban the app in India completely. The NCW Chief in a tweet on May 19, 2020, said that she is of the ‘strong’ opinion that TikTok should be ‘banned totally’ as it is ‘pushing youngsters towards unproductive life.’ From CarryMinati to Faizal Siddiqui, Why YouTube and TikTok Content Creators Should Stop Indulging in Tomfoolery and Realise Their Current Responsibility- Spreading Awareness About COVID-19, UNANIMOUSLY!

The popular Chinese social media app has for long been under fire for its cringe-worthy videos. In fact, there are some, which even aim to glorify abuses, and try to invoke hatred. Over the past few days, ever since the YouTube vs TikTok online feud, people have been trending to ban the video-sharing platform app. And Siddiqui’s circulated clip, added fuel to the fire. The video of Mujibur Rehman is another shameful clip, circulating on the social media. The video features Rehman and his friend, as the perpetrators of the act, with the another TikToker being the victim. BJP leader Tajinder Pal Singh Bagga tagged her in the tweet, where sharing the video posted by a Twitter user purportedly showing Rehman and his fellow TikTokers glorifying rape. Faizal Siddiqui TikTok Video Allegedly Promoting Acid Attack Gets Removed After NCW’s Warning, TikToker Says the Circulated Clip Was Edited Out and Nowhere Related to Acid Attack!

“I am of the strong openion that this @TikTok_IN should be banned totally and will be writting to GOI. It not only has these objectionable videos but also pushing youngsters towards unproductive life where they are living only for few followers and even dying when no. Decline,” reads Sharma’s tweet.

I am of the strong openion that this @TikTok_IN should be banned totally and will be writting to GOI. It not only has these objectionable videos but also pushing youngsters towards unproductive life where they are living only for few followers and even dying when no. Decline. https://t.co/MyeuRbjZAy

#BanTikTokIndia is currently running as the one of the top trending hashtags on Twitter. People are sharing horrific videos that TikTokers are making, glorifying abuses across the platform. They demand a complete ban of the Chinese app, supporting Sharma’s decision to urge the government for the same.

(The above story first appeared on LatestLY on May 19, 2020 09:55 AM IST. For more news and updates on politics, world, sports, entertainment and lifestyle, log on to our website latestly.com).